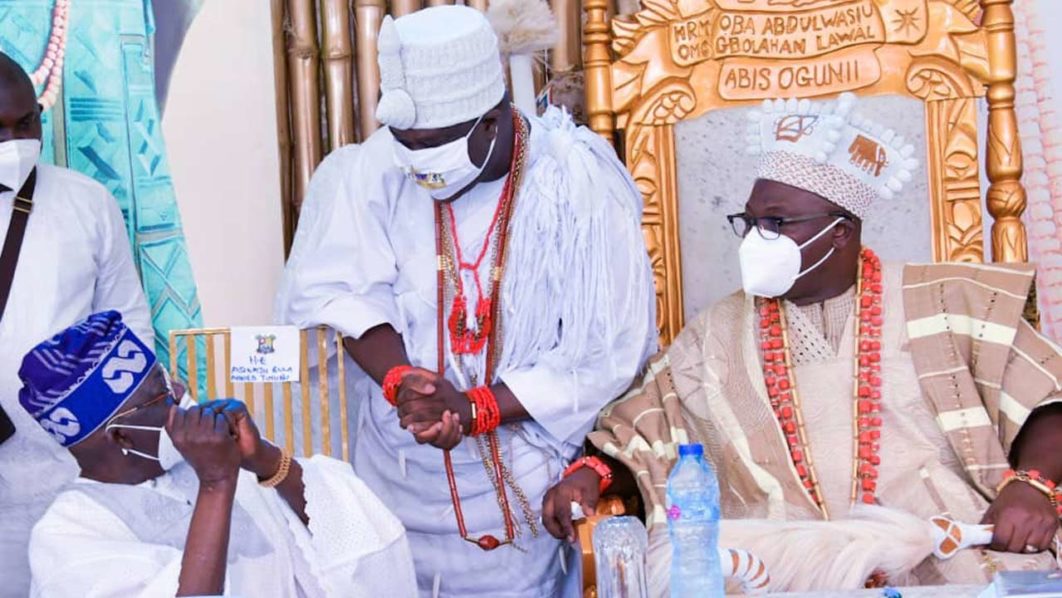 Lagos State Governor Babajide Sanwo-Olu and the National Leader, All Progressives Congress (APC), Asiwaju Bola Ahmed Tinubu, yesterday, urged the newly-installed Oniru of Iru Kingdom, Oba Abdulwasiu Omogbolahan Lawal, to strengthen the existing bond of unity and peace in Iruland for the overall development and progress of the Kingdom.

They said that Lawal’s passion for the development of Iruland would be successful only if he works with the people and other constituted authorities.

They also implored him to work with the people of the kingdom, as well as the state government, to successfully actualise his lofty dreams for the development of Iruland and Lagos State in general.

The duo spoke at the coronation ceremony of Oba Lawal as the new 15th Oniru of Iruland held at the Oniru Palace. Sanwo-Olu, who was represented by his deputy, Dr. Kadiri Obafemi Hamzat, expressed satisfaction with the progress made in the kingdom in the last three months. He said that he was impressed that the monarch had displayed impressive actions characterised by wisdom, knowledge and large heart.

The governor also urged residents in the kingdom to stand firm behind the new monarch to allow the development and prosperity of the kingdom to flourish.

Tinubu, who described Oba Lawal as very intelligent, reliable, dependable and unassuming, urged the people of Iruland to work together in peace and harmony and not in greed, saying that no matter how much of wealth one appropriates to oneself, everyman would leave the world with nothing.

He, however, urged all those who sought to succeed the late monarch but did not make it, to join hands with the newly-installed monarch to move Iruland forward.

In his remark, the monarch, who said that his burning desire to give pragmatic solutions to the challenges facing Iruland had led to the birthing of an initiative, “Let’s Grow Iru Together”, to rally all citizens together to work with him to grow Iruland, said to hit the ground running, from this week, they would embark on five key activities, namely: media parley, tree-planting ceremony, beach clean-up exercise and others.

Lawal promised that Iruland would always be open to business, development, tourism and culture, positive and progressive ideas and initiatives on all fronts. He expressed gratitude to Sanwo-Olu, Tinubu, traditional rulers in the state and all the people of the kingdom, saying that he would continue to be fair to all and strive for the progress and development of the kingdom.