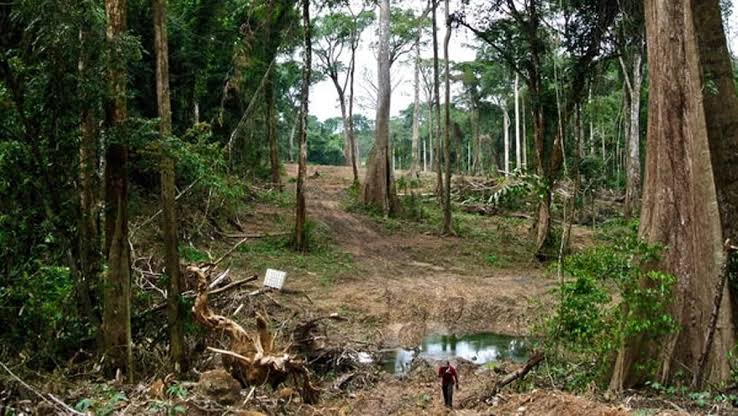 The toxic waste had overfilled the pit where the firm discharged it into and flowed into the forest where it killed the three men.

He was employed as a helper while Samuel was the wood contractor and Monday was the saw operator.

The victims were in the forest reserve to fell trees and cut them to size for sale when the toxic waste flowed them away.

Younger brother to Monday, Emmanuel, said a search party was organised when they trio didn’t return as usual.

He said the search saw the motorcycle which the victims rode to work and after searching for several hours they went home to report to the community leader, the Olufara of Akinfosile, Oba Olamide Ayodele.

Oba Ayodele said the Divisional Police Officer, the Vigilante Corps and the Amotekun Corps were joined by some youths of the community to conduct another search for the victims where they stumbled on their dead bodies covered with black substance.

Emmanuel said the toxic waste overflowed the pit and flowed down the slope where the trio was working and submerged them.

He said the bodies of the victims were seen on the flowing track of the toxic waste after which the youths protested to the company to alert them about the incident.

A community leader, Akinseye Omololu, said the Ondo State government leased the forest to the Chinese company to clear and replant trees thereby allowing saw millers and plank dealers to fell the existing trees in the forest but paid tax to government officials monitoring their activities.

Lawyers to late Akinmusire family, J.I Adeyanju and Dayo Akindejoye ascribed the terrible incident to “the recklessness, irresponsible and dumping of toxic, corrosive, harmful, explosive and hazardous substances by a Chinese Company (WeWood).”

“The deposit its(WeWood) waste product led to untimely death of the younger brother of our client, Mr. Akinmusire Monday, aged 35 and two others after inhaling the hazardous substances.

“Evidently, the Company flagrantly violated the provisions of the enabling laws with impunity which is detrimental to the host communities without adherence to Environmental Safety and International best practices.

“Rather than complying, WeWood chose to honour these laws in the breach. Ever since the WeWood came on board, its activities have been a threat to life, natural resources and properties. The Ufara River remains constantly polluted, the water which the inhabitants’ progenitors used to drink is no longer good for drinking and no fishes to peasants in the community for consumption. The air pollution regularly been experienced have made many business owners and residents to desert the neighbouring Community.

“The younger brother of our client (Akinmusire Monday) was a vibrant, responsible and caring young man with a wife, five children, aged mother, in-laws and siblings who depended on him for their survival.

“Since his remains and others were deposited in a private morgue at Ore, all the dependants have not been finding it easy to sustain themselves. In fact, the aged mother has developed a blood pressure over the shocking news the sudden death of her presumed survivor and devastating incident.”

Ondo Police spokesman, ASP Teo-Leo Ìkorò, who confirmed the incident, said it was an accident as a result of the toxic waste that overflowed where it was discharged.

He said: “There’s a company producing ethanol in the area, Omotosho, and it was an accident as a result of waste from the company.

“The bodies of the victims of the accident have been deposited in a morgue.

“But the company and the families of the victims are already talking and making arrangement on the matter. It was an accident.”