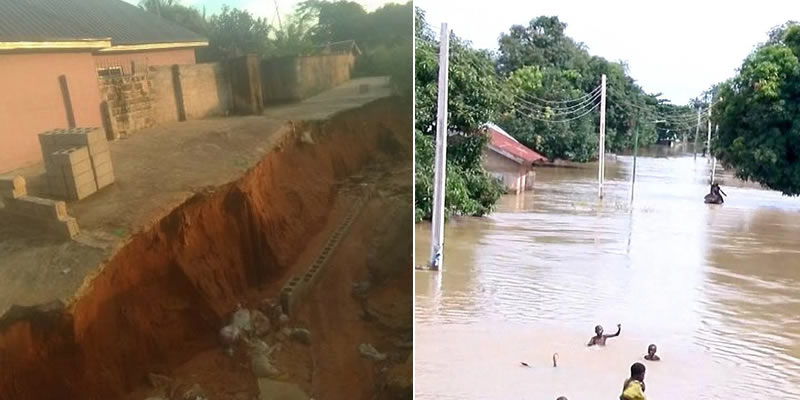 The numbers of victims are yet to be ascertained as at press time. However, figures ranges between 10 – 20 families.

According to reports, the landslide resulted in a wide gully erosion site after it rained from Sunday night till Monday Morning.

Narrating how it happened, one of the victim said “landslide worsened after a heavy downpour on Saturday”.

“We woke up yesterday morning only to see that the rain has completely separated us from our neighbours. My wife and children are still trapped there; they can not climb this mini ladder I’m climbing to come out so is the same with other families.

“We have written to the Commissioner for Works, Ralph Nwosu. We are still waiting for his response even though he has sent a delegation to come and inspect the place today.

#This landslide started about two years ago, we could not park our cars inside our compound for fear of it not being washed away by erosion; we park far away in far distances.” he said.

See photos from scene below;

Community members have called on the state government to act urgently before their homes are submerged in the gully erosion.

The residents have attributed several possible causes to the incident, some have blamed the urban renewal programme of former Governor Rochas Okorocha as the cause, claiming that some structures built by another former Governor, Ikedi Ohakim, to prevent drainage, was pulled down by Okorocha.

Another resident said continuous sand mining at Nworie lane is another factor that has contributed to the landslide.