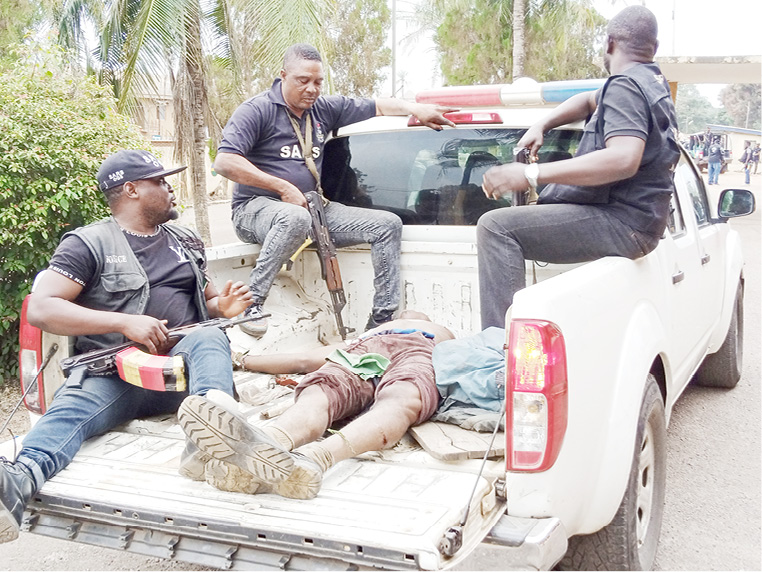 After a dramatic manhunt, the serial killer was gunned down in his hideout by the police.

After a dramatic manhunt, the serial killer was gunned down in his hideout by the police, as our correspondent reports.

In Ogun State, the name Spartan filled people with terror.

It brings to mind images of a demented machete-wielding savage, who goes about chopping down people.

For five months, that was what Feyisola Dosunmu did in a brutal killing spree that claimed eight lives, nine, including his, and a one million naira bounty on his head.

Residents of Iperu-Remo, the hometown of Governor Dapo Abiodun, Ogere, Ilisan and surrounding communities were victims to his carnage.

Mr Ariyo Kuforiji, is one of the residents whose life has been affected by Spartan’s serial killing.

“I have been hearing about Spartan, but I don’t know him.

“I have heard a lot about him, that he is a serial killer,” he said.

But all that would change on July 26, when the killer visited his home.

“I was in my shop when my daughter came to tell me that ‘Daddy, Spartan has cut mummy’.

“I thought that maybe Spartan mistakenly cut her leg or hand, but when I got home, it was the corpse of my wife I met,” he said.

His wife’s death means he has to look after their three children all by himself.

But why did Dosunmu attack?

No one is sure yet.

The information gathered about him was that Dosunmu was at some point a cult member and drug addict.

His drug abuse caused him to have a mental breakdown.

A resident who pleaded anonymity said Dosunmu used to be a patient at the Neuro-Psychiatric Hospital, Aro, Abeokuta, but escaped to Ogere community.

Another resident said he began having mental issues after joining a cult group in school where he became a drug addict.

What caused him to snap remains a mystery but in May this year, the suspect went on a rampage and in three days hacked six persons to death in Ogere, Iperu, Ilisan and others.

Two of those were private guards at an agro farm.

Another victim was an elderly Togolese.

Twenty-four hours later, in Ogere, he attacked a teenager with his machete and killed him.

He would later butcher two others at Iperu-Remo.

The murderous rampage saw residents and police launch a manhunt for the murderer but his whereabouts remained unknown.

Mrs Oluyemi Oladipupo’s older brother was one of the security men Dosunmu killed.

The news of his murder came to her as a shock.

“My brother was 75-year-old, he is a security man and he has been working in animal care for over eight years,” she said. “I was called at midnight and informed that my brother had been killed.

“I fainted, but when I woke up in the morning, I was taken to the mortuary where he was kept, I discovered there were cuts all over his body.”

Her brother was the father of a young child and Mrs Oladipupo is begging for help to take care of the child.

“The child is still very young, the government should come to our aid because there is no one (to assist us),” she said.

While she and relatives of other victims were left to bury their dead, Dosunmu lay low for the next two months.

In July, he resurfaced and killed two more victims, including mother of three, Mrs Kuforiji.

With a new commissioner of police Edward Ajogun, arriving the State, the governor gave the order for the murderer to be apprehended by all means.

By July 31, the police declared Dosunmu wanted and placed a million naira bounty on his head.

One of them found its way into Dosunmu’s hideout in the bush, where it takes centre stage.

During the manhunt, Dosunmu made use of about eight different hideouts.

While some were shacks in the bushes, others were uncompleted buildings, in which he hid in the ceilings and spent time scrawling on the walls with charcoal.

The images and inscriptions were illogical to observers, further giving credence to the suspect’s state of mental health.

While briefing reporters, the Divisional Police Officer of Ogere, SP Ayinde Abiodun explained that Dosunmu used about eight uncompleted buildings as a hideout.

“Wherever he lives, he will surely draw something just to let us know that he has lived there before,” he said.

“He used to hibernate in many uncompleted buildings which we have uncovered.

“Everywhere he goes, you will always see his signs and there are times he would hide inside the ceiling of a newly completed building.

The suspect was tracked to one of these bush shacks around Ogere and shot, when, according to police, he attempted to attack them with a broken bottle.

The two-day operation to find the killer was a joint operation between the police and other security outfits, like Agbekoyas, So-safe corps and Vigilante Group.

Police commissioner Edward Ajogun led the team that conveyed the suspect’s corpse to the governor’s office, Oke Mosan, Abeokuta, where Governor Abiodun was briefed on the operation.

“The governor called that I should try all means to make sure I put a halt to the senseless killings.

“Of course, the Inspector General of Police also directed that we must fish out the killer, so we had been in that bush, my men and I, being in the bush.

“On Monday, 24th August 2020, we almost arrested him, but he slipped through our fingers.

“So, I now felt it is important to employ technology.

“So, we contacted our technical platform in Abuja who provided us with assistance.

“But, on Tuesday, 25th of August, 2020, we were able to have a pin-point location where he was hiding and we engaged him, he broke bottles, drew the cutlass that he had been using to hack people to death, then of course we replied.

“We nailed him on the leg. Fortunately, it turned out to be a fatal injury,” he said.

For the likes of Oladeji Samuel, a student at Gateway Polytechnic, Sapade, whose father was killed by Dosunmu, it is a measure of justice.

But their lives have been made more difficult by his reign of terror.

“I was called around 8 pm by one of our relatives to inform me that my dad has been killed by Spartan.

“I was confused, I didn’t know what to do, but when I got home, I met the police and saw his remains,” he said.

As the first of six children, the pressure is on Oladeji to carter for his younger siblings.

“I have been the person struggling for the family even before the thing happened.

“I have been the one struggling to make ends meet in the family.

“I even try to sponsor myself to school so that I can make it in life.

“My dad has left me with these responsibilities.

“I don’t have any other choice than to take it up as a challenge.”

Without the means to put his siblings through school, they have concluded that they would have to learn some artisanal work, except if the government comes to their aid.

“The truth is that I don’t have any hope, it is only God,” he said, capturing the scope of the havoc this serial killer has caused on many lives in Ogun.