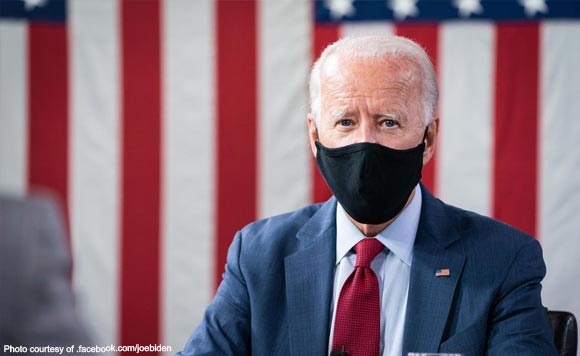 It was the former vice president’s first foray into the state since he secured the Democratic Party’s nomination in June, and comes a day before his Republican election rival Trump makes his own trip here.

The duelling campaign stops — including same-day appearances Friday at a 9/11 commemoration in Pennsylvania — signal the ferocity with which the two will battle over a handful of swing states likely to determine the outcome of the November 3 election.

Biden unleashed searing criticism of the president, saying Trump’s actions “sent our economy into a tailspin,” with tens of millions of layoffs in March and April and fewer than half of those jobs regained.

“This is a recession created by Donald Trump’s negligence, and he is unfit for this job as a consequence of it,” Biden said in Warren, near Detroit.

“How many families are missing loved ones at their dinner table tonight because of his failures?” he said, noting the US Covid-19 death toll has reached 190,000.

“It’s beyond despicable. It’s a dereliction of duty. It’s a disgrace.”

Biden leads Trump in pre-election polling, and the pandemic has especially depressed the president’s approval numbers.

But the economy remains a bright spot for Trump, as voters nationwide and in crucial swing states say they trust him more than Biden to control America’s purse strings.

Biden sought to paint a dark picture featuring a president offshoring US jobs and triggering destabilizing trade wars, allowing the trade deficit to soar to all-time highs, and failing to uphold his promise that no automobile plants would shutter under his watch.

“When the GM transmission plant here in Warren closed last year, I bet the folks around here weren’t all that comforted by Trump’s empty promises,” said Biden, standing before a fleet of US automobiles at a United Auto Workers hall.

The veteran Democrat unveiled two new elements of his economic revival plan: a tax penalty for companies that offshore jobs to avoid paying US taxes, and a “Made in America” tax credit of 10 percent for companies that invest in US factories and workers.

Trump will tout his own robust economic message when he arrives in the state Thursday.

In 2016 Trump snatched Michigan, which had voted Democratic in the previous six presidential elections, by just 11,000 votes, or 0.23 percent, in part by claiming he would bring manufacturing jobs back to suffering industrial states.

Biden is relentlessly disputing that narrative as he attempts to win over working class voters in Rust Belt states that Trump won in 2016, including Pennsylvania and Ohio, regions with significant but declining industrial bases.