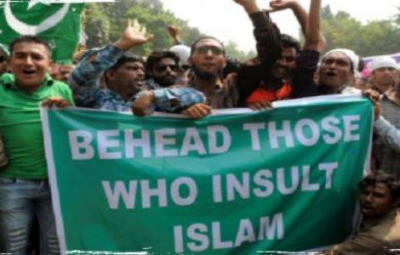 A man accused of insulting prophet Muhammad has been sentenced to death by hanging.

A Christian man has been sentenced to death by a Pakistani court after finding him guilty of blasphemy for insulting Islam’s Prophet Muhammad in text messages he sent to a Muslim co-worker in 2013.

The news was made public on Thursday by a defense lawyer.

Saiful Malook said his client, 37-year-old Asif Pervaiz, was convicted and sentenced this week in the eastern city of Lahore. It was the latest example of the Islamic nation’s strict upholding of blasphemy laws.

Malook said the court rejected Pervaiz’s denial of the charges and he plans to appeal.

Pervaiz was accused of blasphemy by Muhammad Saeed Khokher, a supervisor in a hosiery factory where Pervaiz worked. During his trial, Pervaiz claimed he was accused after he refused to convert to Islam.

Prosecutors, however, submitted evidence that Pervaiz sent text messages to Khokher that contain insulting remarks against Islam’s Prophet, according to a court document. Khokher in his testimony denied pressuring Pervaiz to change his religion.

Under Pakistan’s blasphemy laws, anyone accused of insulting Islam or other religious figures can be sentenced to death if found guilty. While authorities have yet to carry out a death sentence for blasphemy, just the accusation of blasphemy can cause riots in Pakistan.

The latest development comes weeks after a Pakistani man killed an American, Tahir Naseem, inside a courtroom in the city of Peshawar where he was on trial for blasphemy. Naseem had been arrested two years ago after he allegedly declared himself Islam’s prophet.

Domestic and international human rights groups say blasphemy allegations have often been used to intimidate religious minorities and to settle personal scores. A Punjab governor was killed by his own guard in 2011 after he defended a Christian woman, Aasia Bibi, who was accused of blasphemy. She was acquitted after spending eight years on death row and left Pakistan for Canada to join her family after receiving threats.