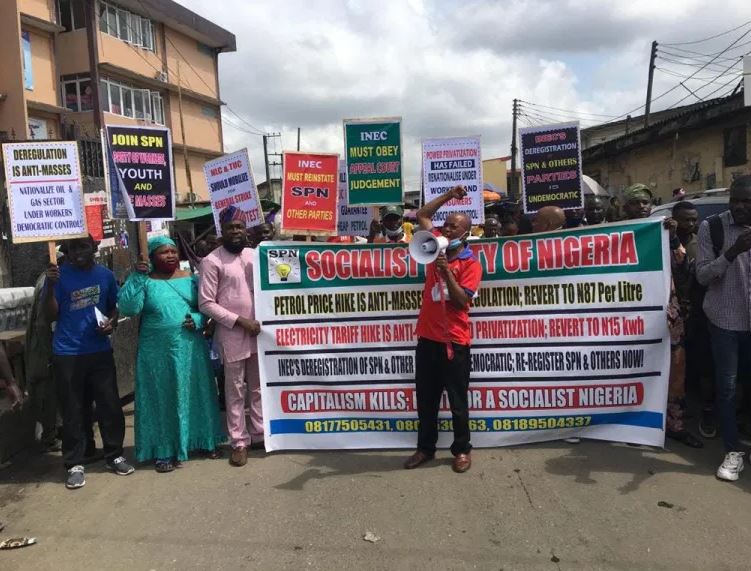 Armed Policemen has forcefully dispersed protesters who took to the streets to decry the increase in electricity and fuel.

Operatives of the Nigeria Police Force have arrested protesters expressing their displeasure over the recent increase in petroleum price and electricity tariff.

The protesters were arrested around the Ojuelegba area of Lagos on Thursday.

It was gathered that apart from the protesters, gadgets of journalists were seized.

One of the leaders of the protesters, Hassan Soweto, said 18 persons were arrested, including four journalists.

“We have just been arrested alongside several members of the Socialist Party of Nigeria and journalists for protesting this morning against fuel price hike, electricity tariff, and deregistration of SPN. I am typing this message at the back of a police van taking us to Area C, Police Command, Lagos,” Soweto, who is the National Youth Leader of SPN, said.

In a statement, the National Organising Secretary of SPN, Dimeji Macaulay, identified some of those arrested as Dagga Tolar, Ayo Ademiluyi, Chinedu Bosah, Lexan Ali, Fidel Davynovich, Oluwole Engels, Soweto, and eight others.

He said, “We condemn this attack as part of the continuous descent of the country into a brutish state of military repression. It is completely unacceptable, and we enjoin all Nigerians interested in preserving this country’s hard-earned democracy to condemn this emboldened descent into a civilian-military dictatorship.

“We demand a public apology from the police for this ridiculous and unprofessional action taking against our comrades, and we ask that proper disciplinary measures be taken on those security officers involved.

“It’s important for you to note that demonstrations and protests are a global phenomenon and are a part of the development of any society.”