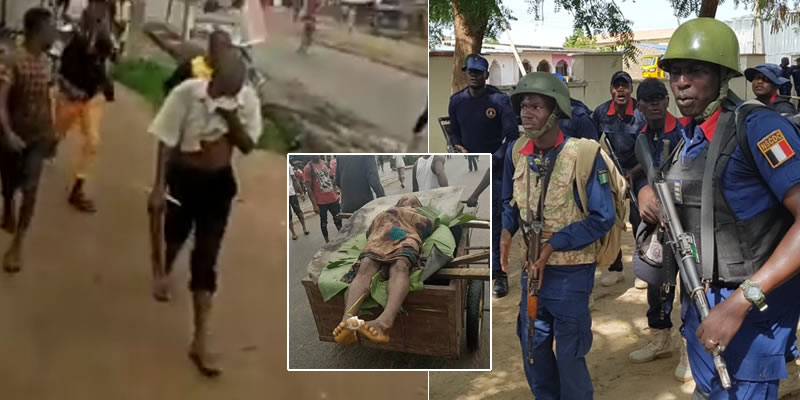 Youths and sympathizers have stormed the streets and expressway in Obingwa Local Government Area of Abia State to protest the killing of their kinsman, a young man identified as Onyedikachi Nwaogu, by an official of the Nigeria Security and Civil Defence Corps (NSCDC) on Tuesday, 8th September.

Hundreds of youths marched with the body of Nwaogu during the protest yesterday, after he was allegedly killed by Inspector Robinson Otobong Abel who was forcing his way through the victim’s compound at Umuokpo community in Obingwa while evading bad roads.

The protesters were confronted by several patrol teams of soldiers and policeman and efforts of the transition committee chairman of Obingwa Council, Chief Kingsley Nnaji, failed to sway the youths, who defied the security agents sporadic gunshots to parade the body at some media houses in Aba.

It was gathered that the NSCDC official attached to the Akwa Ibom State command was accompanying some white men to Akwa Ibom State when he shot Nwaogu as the Hilux van in which they were travelling tried to pass through his (Nwaogu’s) compound due to the dilapidated state of the Aba- Ikot Ekpene highway in the area.

The deceased was said to have insisted that the Hilux van should follow the Aba- Ikot Ekpene Highway as his father’s compound was not the highway. Residents of the community told journalists that the alleged killer, after barking at the deceased to make way, pulled out his gun and shot him on the legs and on his stomach.

After the shooting, the official reportedly threw Nwogu’s body into the back of the Hilux jeep and sped off towards the state’s border with Akwa Ibom State.

However, security men at the border were said to have arrested the NSCDC personnel and others with him while the youths set ablaze the van.

The officer is said to have been detained at the Umuobiakwa Police Division, while the body of the deceased was deposited at the mortuary of Christian Hospital, Nlagu in Obingwa LGA.

Meanwhile, the Abia State government has called for calm in the area and commended all the security agencies that ensured the arrest of the suspect.