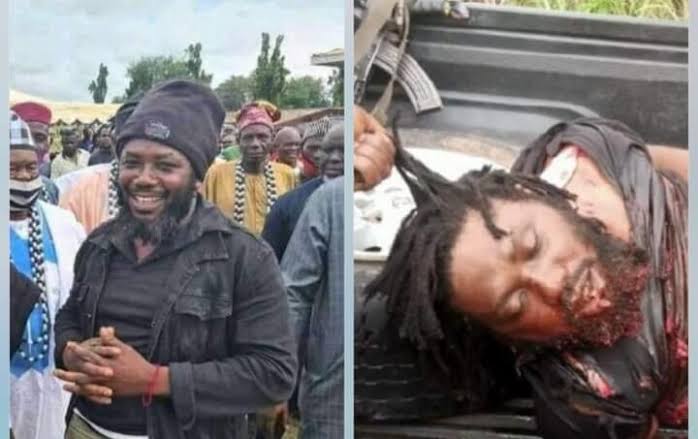 Following the killing of militia and gang leader, Terwase Akwaza popularly known as Gana in Benue state, the widow of the militant, Wantor has described the circumstances that led to the tragic incident as an act of betrayal masterminded by unnamed politicians.

The widow, Wantor also demanded for full investigation into the killing and a monetary compensation of N5 billion from the Federal Government.

Describing the late militant, Akwaza as a good man who was used by some politicians in the state, the 34-year-old second wife said her deceased husband was betrayed by the government.

Narrating the incident that led to the death of her husband, she stated.

“I was in Makurdi when they called to inform me of the incident. Senator Gabriel Suswam went to meet him on Saturday because when they went for him on the second amnesty issue, he said if he did not see Suswam, he was not going to come out. That until Suswam comes around, he will not believe that the amnesty is true. This is because he said that when he first came out for the first amnesty, the government betrayed him, so until he sees Suswam, he wouldn’t come out.

“So Suswam went there to meet him and assured him that he was part of it and that he has arranged everything, that he spoke to the federal security agencies and they had given him (Agwaza) amnesty and that nothing will happen to him. So, they went to Akume Atongo Stadium in Katsina Ala to meet with the chiefs and then surrender their weapons. After addressing them, they were going to Makurdi to finalize the amnesty at Government House. But on his way, the soldiers came and snatched him and killed him.”

Asked how she got the information of her husband’s death, she said “ I was in Makurdi and people started calling me that he was snatched by the soldiers from the car that was driving him along with a Bishop and his local government chairman.

She disclosed how after the first amnesty programme, her husband went back into the bush because he felt betrayed.

“After the nitial amnesty he went back into the bush. When the second amnesty programme started, he was briefing me about the development. I spoke with him on Saturday and he told me that he was going for the amnesty and that he is tired of the life he was living. That if the amnesty is genuine, he want to surrender his life to God and work for Him. “

“He told me that he has worked for too long and that he wants to work for God and be a freeman. My husband was not a wicked man. I am not saying it because I am his wife. My husband was not a wicked person. It is people that have used him and initiated him into the kind of character that he exhibited. Sometimes, after everything, he become sober but because he has engaged himself with these people, he didn’t have a say and has no option than to follow their instructions.”