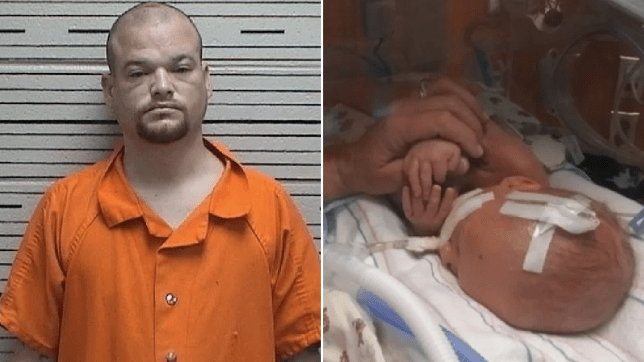 There is possibility that a wicked father identified as Christopher Hundley Nolan could face death penalty if he is convicted of punching his pregnant wife so hard the couple’s newborn son died at 38 days old.

The 32-year-old man was warned on Monday that he could be put to death over the killing of his baby son Adriel Hundley, who died in a hospital in Birmingham, Alabama, on August 11.

Montgomery Advertiser reported that the man has already been charged with reckless murder of his son who died from injuries that he sustained in the womb.

Police said that Hundley allegedly punched his heavily pregnant wife in the stomach during an outburst of domestic violence at their home in Prattville, Alabama, on July 4.

The baby was delivered prematurely shortly after the incident but was placed on life support before he died on August 11.

After Adriel’s death, a GoFundMe page said to have been set up by Hundley and his wife asked for donations ‘to help our family.’ The page read: ‘Our son was born July 4th 2020 a month early and he was born not breathing he was without oxygen for 15 mins and he is fighting for his little life.

‘It has been really really hard on me and his momma and we are not able to work at the moment so we can be with our baby we ask everyone to please pray for him he is our heart and soul and any donation can and will help our family thank you and god bless.’

Chief Assistant District Attorney C.J. Robinson told the Montgomery Advertiser that Adriel’s death was caused by the injuries his father inflicted on his mother.

He said: “Capital murder charges are definitely on the table. We will go where the evidence takes us.

“As the investigation continues we will be preparing the case for presentation to a future session of the Autauga County Grand Jury.

“Upgraded charges could very well come out of the grand jury, if the investigation supports a capital element.”

Alabama law permits capital murder charges against anyone accused of the murder of a child aged under 12. If convicted, the only sentences that can be passed against a capital murderer are death or life behind bars without parole.

Hundley is currently being held in the Autauga Metro Jail on a $250,000 bond.