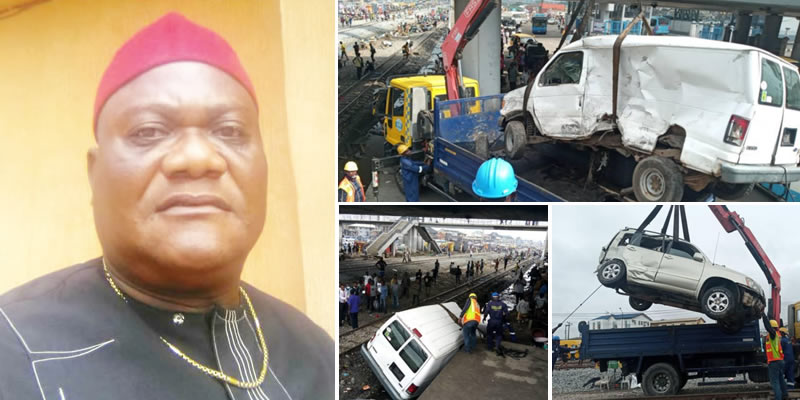 The collision accident involving a train and a bus that veered onto the train tracks while crossing the rail at PWD inward Oshodi in Lagos State on Monaday has recorded a death toll after a SUV was involved shortly after the initial collision.

The deceased, an Anambra State indigene identified as Christopher Ngobidi was a shoe merchant who parked his Toyota Highlander on the rail tracks around the Nigerian Army Shopping Arena in Oshodi, while waiting for the gate of the shopping mall where he sells his goods to open, before the tragic incident happened.

The train had collided with a white Ford Ecoline 250 bus at a distance farther away from where Ngobidi parked his vehicle, he raced towards his SUV to save his son, Arinze, after discovering that the train is dragging the Ford vehicle towards his own vehicle in which his son was taking a nap. Unfortunately, he was crushed to death while his son is fighting for his life in a hospital.

One of the shop owners around Ngobidi’s shop described the deceased as a nice man, lamented that he would be sorely missed. He said “Christopher (Ngobidi) was my neighbour in this market and he was nice to everybody.”

Another eyewitness who narrated the incident said;

“The man parked on the rail track while he was waiting for the Arena gate to be opened. While the train was coming with a bus that it had earlier hit, it started honking. But the man, who was not in the car, remembered that his son was inside the vehicle and he ran to rescue him.

“Before he could come out of the vehicle, they were hit by the train and pushed inside a gutter. The man died immediately, while his son was injured. The train still dragged the bus to the Oshodi under bridge before it stopped.

“The man attempted to rescue his son who was sleeping inside the vehicle when the train crushed him, while his son was injured. The boy is unconscious at the hospital. Christopher’s wife called me this morning to ask after the husband, but I had to lie to her that he had not got to the market yet because I don’t know what to tell her.”

Here is a footage from the accident scene;

Below are photos from the accident scene;