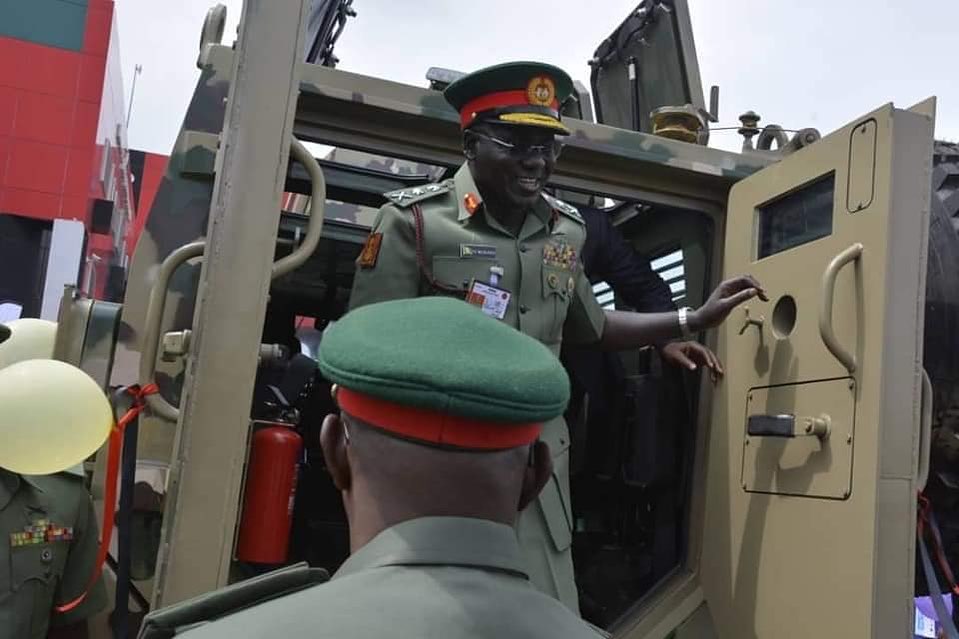 The news of the events in Osun State a few days ago is quite a refreshing one, especially times like this when good and cheery news are hardly reported. The Chief of Army staff COAS Lt Gen Tukur Yusuf Buratai was in the state of Osun to launch some projects that were executed by the Army Corps of engineers. The projects are considered as landmark special intervention programs which are part of the several COAS contributions in support of the Nigerian army non kinetic line of operations.

One of the projects is the construction of a Bailey bridge across river Osun at Kuta, Aiyedire Local Government Area, the bridge is a link between Kuta- Ikoyi on Ede Road. It is interesting to know that this area has yearned for a solid link bridge like this since independence only for a COAS from a totally different region of the country to be the one to deliver such a great project to the good people of Kuta .

Surely economic activities in that area will not be the same again. The fascinating thing about this project is the fact that it touches the people right at the point of their need. Unlike some other phony intervention programs that are just used to siphon money, this project is an answer to years of prayers and deprivation.

Also commissioned on the same day is a hospital project in Asamu in Ola oluwa Local government area. The hospital is to be managed by the 2nd division of the Nigerian army. This is indeed a very kind gesture from the army leadership. This project will no doubt save lives. It will also help the state government in its drive to make health care available to all , especially for those residing in the rural areas, who are actually the most underserved when it comes to health care delivery in our nation.

Events like this have now become typical of the Army under Lt Gen Tukur Yusuf Buratai. Despite attending to its constitutional responsibility of protecting the nation against external and internal aggression, the army still finds time and resources to attend to the needs of the society and communities where they serve. I consider this very noble and very admirable.

Since his appointment as COAS in July 2015, his actions and activities stand him out as a goal getter. His handling of the Boko Haram insurgency issue as soon as he assumed office, in compliance to Mr President’s order that the command and control Headquarters of the theatre of operation of the war against Boko Haram be relocated to Borno and within few months by mid-2016, we had started witnessing great progress in the war against Boko Haram.

READ  All is not well with Nigeria – Sultan of Sokoto

Before assuming office as chief of army staff, almost 14 local governments were under control of the Boko Haram terrorist group. Carrying out deadly attacks on whole local government areas, kidnapping people in their hundred and in some cases thousand. It was really a very bleak point in our national history. I won’t envy him at the time he took up the job to be COAS.

A few years later, he has been able to change the tide of events. The army under Buratai’s leadership has gallantly fought back, recovered lost territories and in fact decimated the Boko Haram terrorist group. Most states in the North East region that were under Boko Haram siege are now relatively safe. Yobe , Adamawa , Bauchi ,Gombe are all now relatively free from Boko Haram attacks.

Some remnants of the fleeing Boko Haram terrorist must have joined up with some criminal elements around the north east region to form some of these bandit groups that were causing mayhem in some North western states. The army moved in to clear off the bandits, the launching of the operation Sahel Sanity in the North West states turned out to be a game changer. Many bandits camps in the forests have been cleared with many bandits killed and several others arrested.

All the above have been written to show that even in his field of soldiering Lt Gen Buratai has performed excellently well but there is yet another side to his record as COAS that may not be that visible, which is the positioning of the army to engage in programs and projects that touch the life of the people aside combatting.

Buratai has redefined corporate social responsibility CSR in the Nigerian Army and indeed Nigeria. The truth is, Buratai comes across as a very compassionate man. You can tell that from his disposition to work. One of the first things he did upon assumption of office is to begin the process of better welfare packages for the men and women of the army. He not only improved the welfare packages , he also ensured that allowances for soldiers on the battlefield went directly into their account to avoid the issue of short changing them as was the case before now.

Under his leadership the Nigeria army has engaged in massive CSR programs like never before. The Nigeria Army has been at the forefront of several developmental projects in the north east region. Rebuilding roads that have been damaged by Boko Haram insurgents, rebuilding bombed bridges, helping with resettling Internally Displaced Persons IDP back into their communities etc.

The army built a million litres water treatment plant in Abakpa Enugu state, renovated schools in Imo State, repaired roads in Kaduna state, renovated many hospitals across the country. The siting of a world class Army reference hospital in Abakaliki, the building of a world class Army University in Bui Borno state. The Army has indeed set a new margin in CSR models in Nigeria. If only other institutions and organizations whether government or private could emulate what the Nigeria Army is doing with CSR, you can only imagine the rate of development this country would be witnessing by now.

The army though having its core responsibility still finds time to impact their immediate communities wherever their barracks or formations are located. What can be the excuse of other organizations not to follow suit. I mean who else has a more difficult job than the Nigeria Army, yet they still find time to do that much good.

Lt Gen Buratai perhaps due to his very strategic thought process, understands clearly the need to have the support of the local community in winning any battle within the area of operation. So he strategically tries to win the people to his side so as to get their support in the fight against the terrorist or any other criminal group

That is perhaps the reason why he prioritizes army intervention programs along communities where the army is operating in order to win the hearts and support of the locals. This strategy turns out to be very potent and effective in winning the several ongoing battles against all sorts of criminality.

One thing that is now very clear to me is the fact that leadership is very key, in fact leadership is everything. Once you have the right leadership in place chances that things will go very well are high. It is very crucial that we begin to look out for people with great character and competence to lead us in various sectors of our lives. It is now evident that getting leadership right is almost tantamount to getting it all right.

That is why I commend President Buhari for making an excellent choice in the appointment of Yusuf Buratai as the head of the army. This is by far one of the best appointments Mr President made. He was appointed at about one of the most challenging times for our Army in its entire history, yet he was able to weather the storm and stabilize the country. This feat cannot be achieved by just any mediocre.

We commend Mr President for having faith in Lt Gen Buaratai and , we are glad he has not disappointed the trust Mr President had for him. The lesson here for us all is to be committed to our work and to always give our utmost best in whatever assignment we are given.

The main essence of this write up is to encourage organizations that have the wherewithal to help society to always do so, without being prompted to do so. Take a cue from what the Nigeria army is doing and emulate them in your own little way. It will surprise you how every little actually helps.

We seem to be a society where organizations and perhaps most of us do not seem to be giving back enough to society , it is never too late to begin though. It is highly refreshing that despite the many negative things that are written about the army, they are yet the one organization leading the way in supporting local communities with much needed infrastructural intervention.

My advice to the COAS Lt Gen Tukur Buratai is that he should not relent in the good that he is doing knowing well that only God can reward a man beyond his expectation. I am sure most Nigerians appreciate you already. Your boss Mr President also appreciates you. The men and women of the Nigeria army really appreciate you. This is enough encouragement for you to continue with your good works and if possible double up on them. History and posterity will definitely be kind to you.

Ojo is a public affairs analyst based in Lagos.