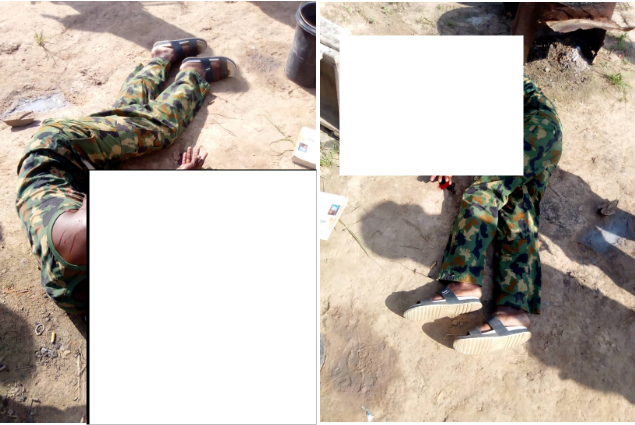 The deceased allegedly committed suicide with his personal weapon on the head which resulted to his death.

Additional information revealed that the late soldier left behind a suicidal note addressed to his wife.

His remains was evacuated for further action while investigation has commenced on the circumstances that led to the incident.

An official statement by Nigerian Army Headquarters, has not been released yet to ascertain circumstances surrounding the death of the Nigerian Army.

The soldier who left a suicide note behind for his wife was alleged to have shot himself on the head and bled to death.

Meanwhile, on Wednesday, September 16, the Nigerian Army, interred the remains of Lance Corporal Benjamin Collins, who was tortured to death by three senior officers at the Mogadishu Barracks, Abuja, in 2017.

Collins was buried with full military honours at the Guards Brigade cemetery along Kubwa Expressway by soldiers from the Army Headquarters Garrison Battalion.

The national flag was presented to the deceased’s mother by Lt. Col. S. Shuaibu on behalf of the President, Major General Muhammadu Buhari (retd.).

Oyewole, who fought to ensure justice for the deceased, thanked the COAS and the Army Headquarters Garrison Battalion for approving the funeral.

A general court martial had in February sentenced Majors Akeem Oseni and Ogbemudia Osawe, and Second Lieutenant Nuhu Dogary to 10 years’ imprisonment for torturing the army officer (Collins) to death.

The convicts were said to have moved Collins from a guardroom at Mogadishu Army Barracks to a bush near the Ihejirika Quarters along the Abuja-Nyanya Expressway, where he was assaulted while in handcuffs and leg chains.

Collins, who hailed from Rivers State, died after the assault, which took place on February 23, 2017, and his corpse was deposited in Asokoro General Hospital morgue.

After the incident, the Army officers reported to their superiors that Collins, who was held for over two years for travelling to Lagos to see his sick aunt without official permission, had escaped from custody.