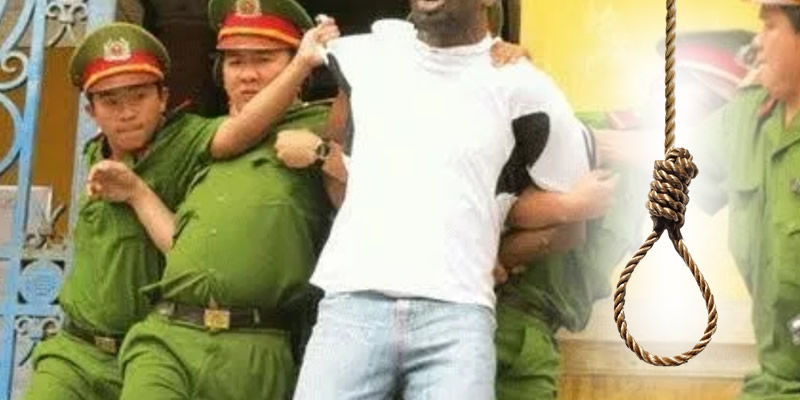 The Nigerian convict had faced a capital drug trafficking charge and was arrested 9 years ago for allegedly trafficking almost 2kg (1,963.3g) of methamphetamine found in a black trolley bag he took with him from Nigeria into Singapore in 2011.

Recall that on Nov 13, 2011, Ilechukwu flew from Lagos, Nigeria to Singapore after collecting a black luggage at the Nigerian airport. He found only clothes in it and the luggage passed several immigration checks in both countries without problems.

He handed the bag to a Singaporean stall assistant named Hamidah Awang at a Clarke Quay bus stop. Hamidah’s car was then searched at Woodlands Checkpoint and drugs were discovered in the luggage.

However, Ilechukwu was acquitted after a trial in the High Court in 2014 but the apex court then reversed that decision in 2015 and found him guilty of drug trafficking.

The apex court then sent the case back to Justice Lee to determine if Ilechukwu should be given life imprisonment or the death penalty.

However, in 2017, his lawyers successfully persuaded the same panel of apex court judges to review the conviction due to a “unique turn of events”.

It was the first time in legal history where the Court of Appeal agreed that there could be enough new material to say that its previous decision was wrong.

Last year, the High Court judge found that Ilechukwu did previously suffer from PTSD and had experienced some post-traumatic stress symptoms when giving his statements.

On Thursday, the four apex court judges who acquitted Ilechukwu found that there was now a “plausible innocent explanation” for Ilechukwu’s lies and omissions.

His motive could no longer only be attributed to his guilty mind, they added.

In a statement after the acquital, Ilechukwu’ lawyers said: “It has been a long and hard-fought pro bono case, involving specialist psychiatric evidence and issues of cross-cultural sensitivities. We are delighted that justice has prevailed to acquit our client this morning.

Congratulatory messages have been pouring in for Eugene Thuraisingam and his leagal team since the acquital.