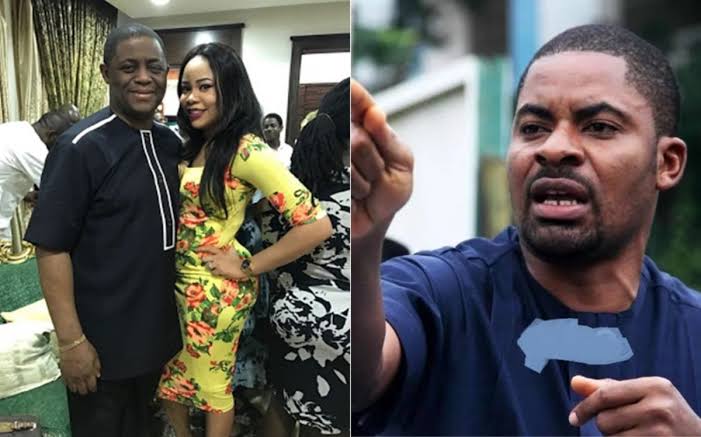 It has been revealed that Femi Fani-Kayode’s marriage didn’t crash because of domestic violence.

A new report by Vanguard has revealed what really caused the strain in Femi Fani-Kayode’s marriage to his wife, Chikwendu.

Details revealed by Human rights activists and Convener of Concerned Nigerians Group, Deji Adeyanju has it that the marriage might have collapsed due to mental and health issues on the part of FFK’s wife.

Adeyanju, who is a close confidant of former minister of Aviation, Chief Femi Fani-Kayode and his wife, Precious Fani-Kayode, yesterday in a series of tweets debunked the rumours making the round that domestic violence was responsible for the separation of FFK and his wife Precious Chikwendu saying the story was planted by her after their marriage crashed.

Nairaland reported that Social media was agog with several reactions of the duo’s separation until Deji Adeyanju wrote a series of tweets on Twitter about what really happened.

Recall that, Popular Nigerian Blogger, Dr Kemi Olulunyo had also thrown her weight behind Chief Femi Fani-Kayode, saying that after a series of investigation, Precious’ uncle and aunt confirmed to her that Chief Femi Fani-Kayode has never beaten precious in the house or anywhere and that all allegations of domestic violence are false.

Deji who claimed to be close to the couple said he has been in the know on many of their quarrels in the past which he had even been invited to resolve several times and it was never about domestic abuse.

Deji also stated that FFK has done everything for Precious from supporting her beauty pageantry with about $500,000 at the start of their relationship to standing by her when she had several surgeries. He also claimed FFK took care of the medical bills of her parents who were battling with cancer amongst several other things.

Deji stated that Precious Fani Kayode knows where her problems are coming from and they are spiritual. Deji advised her to seek the face of God instead of chasing shadows. He also stated that the fact that she has survived this long is a testimony.

Deji recalled when Mrs Precious agreed to be checked into a mental home because of her mental issues and how she consequently ran away from the mental home.

Although FFK has been alleged by his previous wives of domestic violence, Deji tweeted that he cannot speak on that because he wasn’t a part of it but on the issue of FFK and Precious, Deji reiterated that it is not about domestic violence because she has never raised this issue, nor her family members that stay with them at home, or at any time when Deji went to settle issues between she and her husband.

Deji recounted how Mrs Precious had lost her mind on several occasions and even attacked her husband FFK and other domestic staff with a knife.

Although Deji subsequently deleted all the tweets, he, however, left several new tweets advising young people to stay away from toxic and crazy people and that marriage is not mandatory for all. We, however, gathered that Deji deleted his original tweets after FFK called him to do so saying no one should join issues with her publicly.

While we wait for an official statement from the Former Minister, Her Uncle who granted an interview with premium times debunked the allegations of domestic violence and said he had never witnessed anything like that in their home even as he confirmed that the couple were currently separated and hinted that their issues were caused by his niece instead of the domestic abuse making the rounds in the media.

Another source has hinted that The marriage started hitting the rocks because of a case of infidelity on her part last year where several people including pastors came in to resolve the issue and asked FFK to forgive her.

Precious Chikwendu, a former beauty queen is alleged by her uncle for always having “unapproved meetings” as he subtly put it to save face and added that her husband FFK could no longer tolerate it.

The couple, who are parents to four sons, including a set of two-year-old triplets, have been married since 2014.

although he subsequently deleted his tweets. we were able to get some of them.

READ  “Wizkid should have used the N400m to help 400 unemployed youths instead of buying a watch” — Nigerian Guy
Share this Post[?]