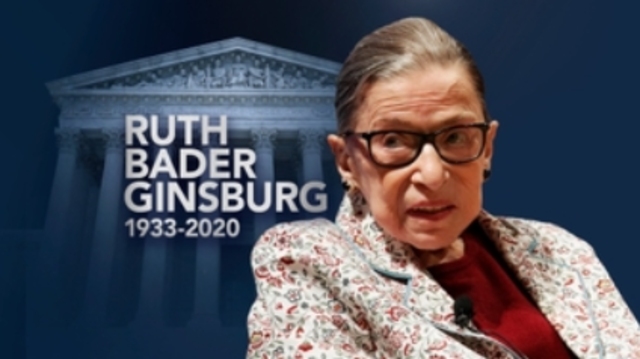 US Supreme Court Justice Ruth Bader Ginsburg, a cultural icon and women’s rights champion, has died at the age of 87, the nation’s high court has announced.

She died on Friday evening at home in Washington D.C. due to complications from metastatic pancreatic cancer, the statement said.

Ginsburg’s health has been heavily scrutinised as she struggled through several bouts of cancer and hospitalisations. Her death comes just six weeks before the US presidential election and is likely to set off a nasty debate over who will replace her.

“Our Nation has lost a jurist of historic stature. We at the Supreme Court have lost a cherished colleague. Today we mourn, but with confidence that future generations will remember Ruth Bader Ginsburg as we knew her — a tireless and resolute champion of justice,” the high court’s chief justice John G Roberts said in a statement.

Ginsburg, viewed as the leader of the court’s liberal wing, had become an icon of women’s rights. She had been affectionately nicknamed the “Notorious RBG” after a Brooklyn rapper, turning into a feminist cultural icon in her 80s.

Ginsburg was just the second woman to be nominated to the high court and served more than 27 years after being nominated by President Bill Clinton in 1993.

A private interment service will be held at Arlington National Cemetery, the Supreme Court said. US President Donald Trump ordered flags to be flown at half staff, calling her a “titan of the law”.

Hundreds gathered to mourn the justice’s death outside the Supreme Court in Washington on Friday evening.

Before being appointed as a judge, Ginsburg helped to launch Women’s Rights Project of the American Civil Liberties Union (ACLU) in 1971 and served as the ACLU’s General Counsel from 1973–1980, the Supreme Court said in a statement.

Ruth Bader Ginsburg types while on a Rockefeller Foundation fellowship in Italy in 1977.Collection of the
She often argued cases related to sex equality before becoming a judge, defending a widower’s rights to his late wife’s social security benefits and other male plaintiffs in an attempt to change gender equality at the highest levels.

Early on in her tenure on the US’ high court, Ginsburg penned the majority opinion in the US v Virginia, overturning an all-male admission policy at a military school.

Announcing the opinion of the court, she said that the school relied on generalisations over how women are and said this did “not suffice to deny opportunity to women whose talent and capacity place them outside the average description.”

Her scathing dissent in the 2013 case Shelby County v Holder would fuel her image as a cultural icon. The case struck down parts of the Voting Rights Act that required US states to get federal preclearance before changing voting laws.

Ginsburg wrote that throwing out that requirement when it had helped to stop discrimination was akin to “throwing away your umbrella in a rainstorm because you are not getting wet.”

Ginsburg was one of nine women in her class of hundreds at Harvard Law School and often spoke about how employers refused to hire “lady lawyers” after she graduated school.

READ  Oluwo Of Iwo Faces Dethronement Over Alleged Criminal Past

She juggled raising a child and caring for her husband, who was sick with testicular cancer, during law school. She was an editor of the Harvard Law Review and graduated top of her class after transferring to Columbia Law School.

After graduating, she was often rejected due to her gender and Columbia law professor Gerald Gunther had to push for a judge to hire Ginsburg as a law clerk.

She eventually worked in academia becoming one of a handful of female law professors.

When she was nominated to the Supreme Court in 1993, she spoke about taking a path that was not available to her mother.

“I pray that I may be all that she would have been had she lived in an age when women could aspire and achieve and daughters are cherished as much as sons,” Ginsburg said.

“People ask me when you will be satisfied with the number of women on the court,” Ginsburg later said in one interview. “When there are nine.”

A debate over her replacement

The death of Ginsburg has already sparked debate in the US over whether President Donald Trump should nominate her replacement just six weeks before the US election.

Senate majority leader Mitch McConnell has said the Senate will confirm a Trump nominee despite the process typically taking months to vet and confirm a candidate.

Former President Obama said in a statement that Ginsburg was “a relentless litigator and an incisive jurist” who “inspired generations, from the tiniest trick-or-treaters to law students burning the midnight oil to the most powerful leaders in the land.”

On the topic of replacing her, Obama said that Republicans had “invented the principle that the Senate shouldn’t fill an open seat on the Supreme Court before a new president was sworn in.”

“A basic principle of the law — and of everyday fairness — is that we apply rules with consistency, and not based on what’s convenient or advantageous in the moment,” Obama wrote in his statement.