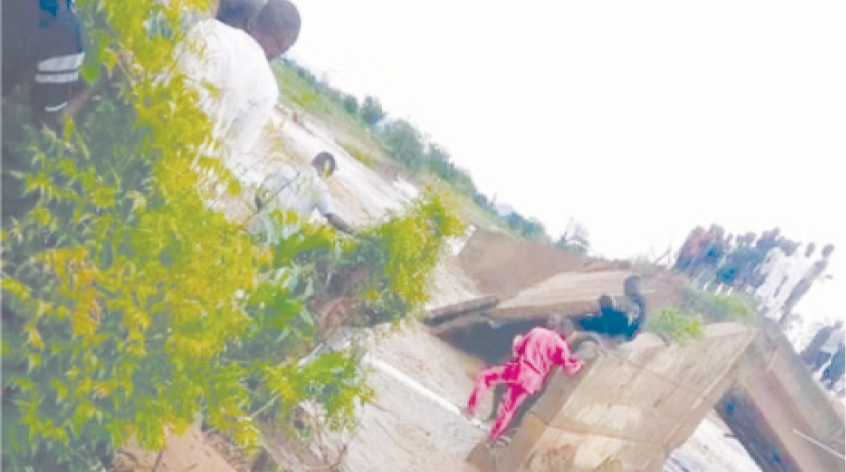 Calls for the reconstruction of bridges destroyed by Boko Haram in Northern part of Adamawa since 2014 have been renewed after the collapse of Wuro-Gayandi bridge.

Military engineers constructed a temporary structure at Wuro-Gayandi by sand filling the broken part, providing access for vehicles and pedestrians until last month when flood water washed away the respiratory structure, completely cutting off Madagali following liberation of the territory from the insurgents in 2015.

“You can see that vehicles from one side of the river cannot cross to the other side.

“All vehicles have to stop at one end and passengers cross to the other side to board different vehicles.

“In other words, Madagali has been cut off from the rest of Adamawa.

“This is really bad,” a resident, Ijandir Solo, lamented.

Residents are disturbed that since the award of contracts for the reconstruction of the bridges by the federal government to Rhas Nigeria Limited more than three years ago, nothing has changed as the contractor failed to make any progress.

The state of the bridges continues to generate criticism from residents, travellers and from local authorities with renewed calls on President Muhammadu Buhari to revoke the contract.

While construction work at Dilchim and Kuzum is being executed with snail speed that residents said no progress had been achieved in years and called for sack of the contractor, no work men or machinery has been mobilised to Wuro-Gayandi.

Former chairman of Madagali, Yusuf Muhammad, said the contactor obviously lacked the capacity to handle the projects as evidenced by the type of tools they deployed to their sites.

He noted that Rhas Nigeria Limited relied on ordinary diggers and wheel barrows to construct culverts along the Maraban Mubi-Hildi-Uba road, which may result in a sub-standard job.

He wondered how the federal government awarded such an important contract to the company in the first place and refused to revoke it after they failed to record any progress in four years.

“In the case of Wuro Gayandi, no work has started as the contractor has not yet mobilised to the site”, said a resident, Hamma Ali.

During a visit to Dilchim and Kuzum construction sites in August, 2019, Adamawa State governor, Ahmadu Umaru Fintiri, accused the contractor for incompetence and lack of capacity to handle the projects.

He called on the federal government to revoke the contract and re-award it to another company for speedy execution of the repairs, saying the communities had suffered enough since 2014.

Fintiri noted that the economic losses suffered as a result of the contractor’s failure were enormous in an area known for robust commercial and agricultural activities.

Sources indicated that the governor had contacted the federal government and made several trips to Abuja to follow up the matter with relevant federal government agencies including the Federal Miniature of Works and the North East Development Commission (NEDC).

Speaking on behalf of the contractor, the site engineer for Dilchim Bridge, Joshua Yakubu, said the delay was necessitated by activities of insurgents in the area, urging the local communities to exercise patience as the company was committed to the completion of the project as soon as possible.