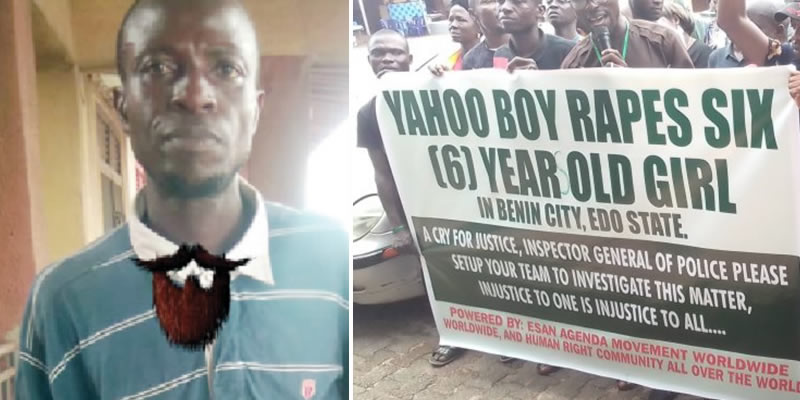 A father of of six year old girl who was defiled in Edo State after she was lured with rice, noodles, egg and defiled by a suspected Yahoo Boy named Destiny Obiyan on Saturday, July 4, 2020, has rejected a sum of two hundred thousand Naira (N200,000) from the suspect, and accused Edo police of complicity on the case.

There was a protest march to the secretariat of the Nigeria Union of Journalists (NUJ), Edo State Council, where resident trooped out with banner demanding justice for the 6-yr old child that was allegedly raped.

Recall that Okehelem Onyema, a tricycle rider, noticed that his daughter was bleeding profusely from her private part after she walked into the house herself, following several hours of futile search. The girl told her parents on arrival that after the suspect fed her with the food he used to lure her, he pulled her pant in his room, puts his fingers and after that, he inserted his penis.

According to PUNCH, the embattled parent of the victim accused police of asking them to accept N200, 000 offered by the suspect’s family and they were allegedly angry that they did not accept the offer. Narrating his ordeal, the father said “What surprised me was that before I got to the SCIID, the suspect, his family members and lawyers were already there. The case was transferred to the place on July 10, 2020. We are the ones placed at the centre of the interrogation room and being asked questions. We identified ourselves as parents of the defiled girl and a cop police looked at me and said, “You don’t have money and you want to make a case. They offered you N200, 000 and you refused.’’ I was shocked”.

“I was told to sit on the ground, while the suspect and his accomplice were given VIP treatment. Before I could plead with them to see the merit of my case, two policemen on mufti slapped me and I cried like a baby inside the family unit office.

“When the torture became unbearable, I called my lawyer in Asaba, Delta State, who came to save the situation. After calling my lawyer, my phone was seized and they threatened that they would put me in the cell. They even told us that they would have dealt with my wife if not that she was pregnant. Later, the suspect’s family told the new Investigating Police Officer at the SCIID that they wanted to see him privately. They chased us out of the place that Friday evening on July 10. Our statement was not taken. They told us to go home that they had other things to do.’’ He said.

The spokesperson for the police in the state, Chidi Nwabuzor, while refuting the claim of police involvement in the N200, 000 for appeasement, said the matter had already been charged to court and the suspect in police custody.