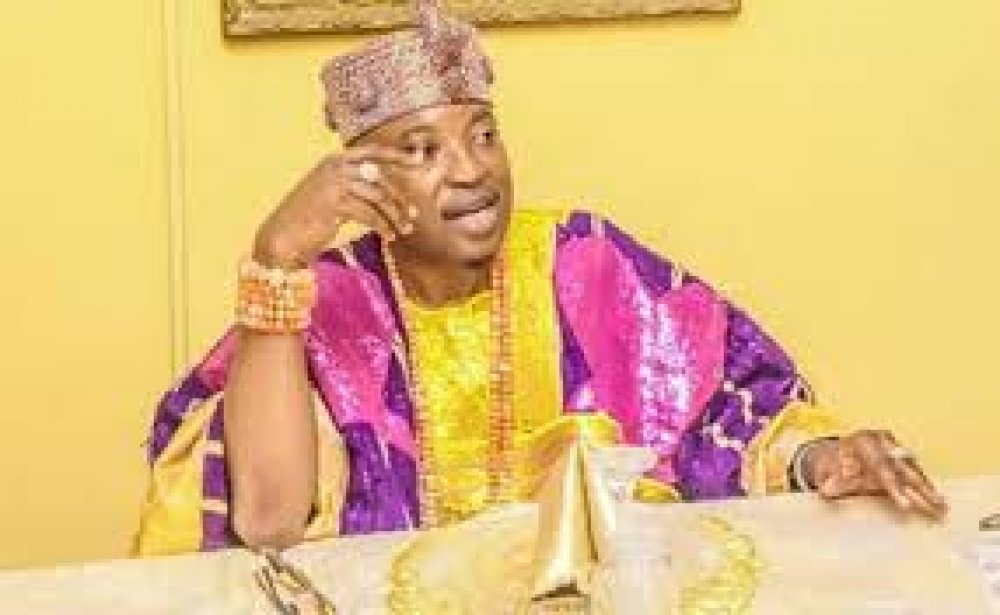 The Oluwo of Iwo, Oba Abdulrasheed Akanbi has reacted to calls made by Iwo kingmakers that he should removed from the throne.

This reaction was contained in a statement released and made available to the press by his media aide, Alli Ibrahim.

The royal father said the kingmakers were acting under duress from a prince who contested and lost the race to ascend the throne.

According to the statement, the monarch said he is not bothered with the antics of detractors who romanced some kingmakers to pull the monarch down.

“It’s a conspiracy of a detractor who has been fighting so hard to become the Oluwo of Iwo. The detractors’ have gone beyond many times to discredit Oba Akanbi and failed serially. The recent was to divide the kingmakers but dead on arrival. Achievements of Oluwo endeared him to Iwo, more. You can’t run down what your children may benefit in the future.

“Oba Akanbi is a king of positive marks. His reign is prosperous, fruitful, and virile to the advantage of all and sundry but because someone who has been a serial aspirant wants to be Oluwo by all possible means is romancing few individuals to detract Oba Akanbi’s reign. The deaf could hear IWO is moving.

“From all indications, Iwo is secured economically, security-wise. The religious Atmosphere, traditional and political deals are peaceful under his majesty. Iwo has never had it so good like this traditionally. The loathe is natural when good things keep coming to town. Detractors romancing my Chiefs should continue wasting their time, Oluwo will keep lifting his subjects”.

Recall that Kingmakers from Iwoland on the 9th of September, 2020 filed a petition against Oba Akanbi.

The petition was addressed to the Governor Oyetola, titled, “Petition for Removal of Oba Adewale Abdulrasheed Akanbi (Oluwo of Iwo) From the throne of Iwoland”.

The document which was signed by twelve high chiefs in the town under the aegis of ‘Concerned Kingmakers in Iwoland”, stated that the Oluwo was convicted for fraud-related crimes in the United States of America and Canada.

The kingmakers also listed in the petition, the various actions of the monarch that prompted their decision to seek his removal to include; his suspension from the State Council Obas for assaulting the Agbowu of Ogbaagbaa, Oba Dhikurulahi Akinropo at the Zone XI AIG’s office in Osogbo, his refusal to attend court when he was sued by the Oluwo of Iwo-Oke, Oba Kadiri Adeoye and his verbal assault on the duo of Ooni of Ife, Oba Adeyeye Ogunwusi and the Alaafin of Oyo.

They also claimed that indigenes of the town living abroad have engaged the service of a legal practitioner, who was threatening to sue the State Government if it refused to remove the monarch.

The petition reads in part, “Sir, the undersigned are Concerned Kingmakers of Iwoland and we are constrained to present this Petition to your Excellency for urgent consideration. It is regrettable to inform your Excellency that the present Oluwo of Iwo (Oba Adewale AbdulRasheed Akanbi) is not supposed to continue to occupy the throne as Oluwo of Iwo.

“Oba Adewale Akanbi has a penchant for fighting notable personalities within and outside Iwoland, at the moment, Oba Adewale fought Chief Abiola Ogundokun, Imran Adio, (a leading Islamic cleric) whom he removed as Otun Ajanasi. He insulted the Alaafin of Oyo Oba Lamidi Adeyemi, Ooni of Ife, Oba Adeyeye Ogunwusi, Orangun of Ila, and other prominent Obas in the state.

“Your Excellency, it would be a sad day in the history of Iwoland and natives of the ancient town if the threat of the legal practitioner was allowed to materialize. The moment such a case is filed, it becomes a public document and anybody can apply for the true certified copies. Even if the matter is later withdrawn.

“The damaging evidence against Oba Adewale Akanbi especially his background as an ex-convict in Canada and the United States speaks volume of the need to excuse him from the throne of Oluwo of Iwo and save the town and the natives the embarrassment of a lifetime.

“In view of the foregoing, we sincerely urge your Excellency to do the needful by removing Oba AbdulRasheed Adewale Akanbi from the throne as Oluwo of Iwo before it is too late”.