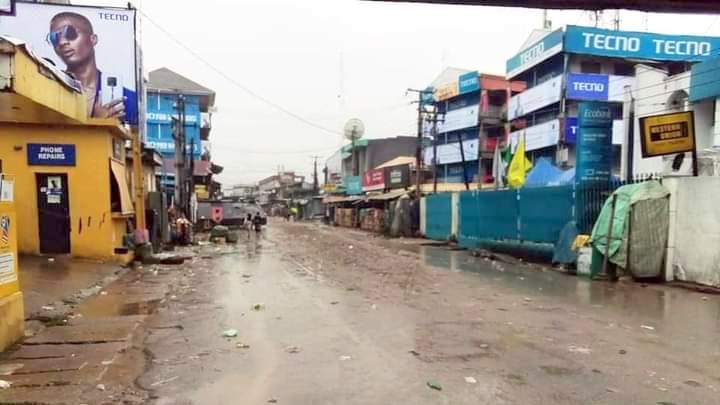 The sit-at-home order issued by the Indigenous People of Biafra (IPOB) to mark the nation’s 60th Independence anniversary was only com­plied with in a few cities in the South East while it was almost completely ignored in more places.

Owerri, and environs was bubbled with activities as the roads were flooded with ve­hicles just as filling stations, markets, eateries, business centres were alive while mo­bile food vendors and others went about their businesses unhindered and unmolested.

Expectedly, a combined team of security personnel, comprising the Operation Search and Flush of the state police command, men of the NSCDC, NDLEA, FRSC, and the army patrolled the major roads to forestall possible breakdown of law and order by IPOB.

Ironically, none of the members of the group was spotted in any part of Owerri.

A commercial bus driver who shuttles between Ower­ri and Orlu anonymously dis­missed the IPOB sit-at-home order as childish.

He asked: “How can they ask me not to come out and look for something to feed my children?

“Have they (IPOB) given us any palliative since the COVID-19 broke out?”

The state Commissioner of Police, Isaac Akinmoyede, had, in a terse statement through the PPRO, Orlando Ikeoku (DSP), warned that his men would deal decisive­ly with anyone who dared to breach public peace under any guise during the Inde­pendence anniversary cele­brations.

It was business as usual in Abakaliki, capital of Eb­onyi State, as residents went about their normal business activities.

Also vehicles moved in and out of the state, as usual com­mercial activities were in full swing.

No one was seen on the streets or around residential areas coercing anyone to sit at home during the public hol­iday in the state.

Police spokesperson, Loveth Odah, stated that there was no reported case of harassment from citizens by any group or groups in the state.

In Enugu, markets like the Ogbete main market re­mained open and business activities went on as normal.

But the situation in Nnewi, Anambra State, was different from what obtained in Ower­ri.

As at 7:00a.m, the situation in Nnewi and environs, all motor parks in the industrial city, includ­ing Peace Park, GUO, Izu­chukwu, Eastern Mass, Ihiala Mass, Globis, and other major parks in the area were sealed and there were no vehicles in the parks.

Apart from a handful of private vehicles and motor­cycles, major roads in Nnewi were virtually empty, and commuters were stranded.

Also, it was discovered that all the major markets, like the popular Agbaedo Market, Motorcycle and Motor Spare Parts Markets, were open for businesses but received few customers as many people remained indoors.

Markets like Orie Agbo and Okpunoegbu mar­kets, it was found that those markets were also sealed off, and only few women were seen displaying food items on the roadsides.

In Nnewi North Local Government Secretariat, it was also observed that the usual ceremonies character­ising independence anniver­saries were not observed as school children and govern­ment functionaries were not in sight.

There was no sight of any security personnel on any road.

When contacted, the state Commissioner for Informa­tion and Public Enlighten­ment, C-Don Adinuba, said that the state government di­rected that the usual activities characterising independence anniversaries would not hold this year in Anambra due to the COVID-19 pandemic.

He said: “The government of Anambra State had direct­ed Ndi Anambra that this year’s Independence Day cel­ebrations would be low-key.

“The worst is not yet over. Therefore, the usual match parades and other ceremo­nies at designated locations in Awka and the various local government fields in Anam­bra State will not hold.”

In Awka, Abia State, the order was partially success­ful as some business men and women opened shops and warehouses in a flagrant disobedience to the order.

Similarly, in Umuahia, the Mazi Nnamdi Kanu, markets and business premises were opened without molestation. hometown of the IPOB leader,

Except for government of­fices and banks which were observing the one day pub­lic holiday to mark the 60th Independence anniversary, business people conducted their businesses unhindered.

However, some tricycles operators went off the streets in obedience to Kanu’s direc­tive.

Security operatives like the army, police, and the Depart­ment of State Services (DSS) were not seen in the streets, but sources said the police were searching tricycle op­erators to ascertain if any of them that had hoisted the IPOB emblem.

In Aba, the sit-at-home was partially successful as many traders refused to open their shops in obedience to the or­der.

Even though the Ariaria International Market in Aba was open, some shops were closed, possibly in solidarity with IPOB.

The Onitsha main market and other markets in Onitsha remained shut on Thursday.

However, filling stations and some businesses in the streets were open.

A resident, Geoffrey Ndubuisi, who manages a fill­ing station in the city, said he opened for business as usual.

He, however, said that the closure of the markets affect­ed his business.

“With the closure of the markets, the vehicular and human movement is highly limited.”

He, however, noted that businesses that opened were not molested or disturbed by IPOB members.

“Some business owners who have sympathy for IPOB also voluntarily didn’t open today,” he added.

Regardless, the IPOB has boasted that the sit-at-home order was successful.

In a statement by the me­dia and publicity secretary of IPOB, Emma Powerful, the group boasted that the order was “totally successful in so many states and cities in Bi­afraland”.

“The compliance with this order is to showcase our read­iness for the speedy coming of Biafran freedom and inde­pendence.

“There were empty mar­kets, roads, no vehicles on the road of Biafra and Bi­afrans all over the world are on the streets of their respective countries where they find themselves with our brethren from Oduduwa nation.”

It thanked it members in South Africa, United States of America, Canada, Britain, France, Japan, Germany, In­donesia, Australia and other countries of the world for their support.