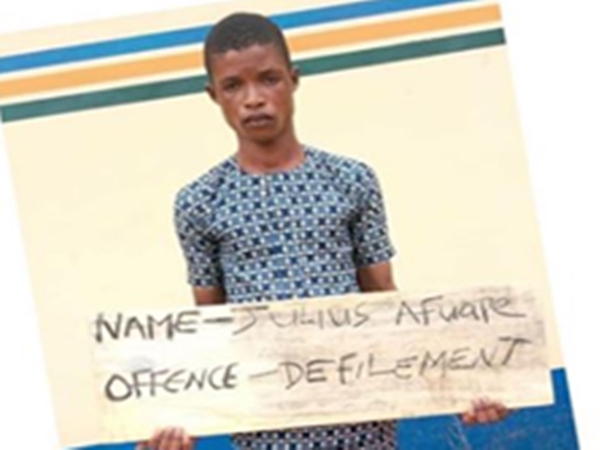 A 21-year-old artisan, Julius Afuape, has been arrested for raping a 13-year-old girl.

The suspect was alleged to have hidden under the cover of his frequency in a house within his neighborhood in Ayetoro, where he was usually engaged in the servicing of their generating set and on Wednesday, September,30,2020, he burst into the victim’s house at about 1:30pm and tricked the victim to believing that her aunt asked him to come and service their generating se

Oblivious of the real intention of Julius, the girl unquestionably flung open the door of the apartment to the suspect who overpowered and dragged her into her aunt’s bedroom, where he forcefully had carnal knowledge of her.

After committing the act , he fled the area and went into hiding .The victim’s aunt returned home and was fed with the distasteful news which she complained at Ayetoro Police Division.

The police were able to track down the suspect on Friday,October 2,2020 and he was arrested . He confessed to committing the crime while the victim was taken to the General Hospital where it was medically confirmed that her virginity had been broken.