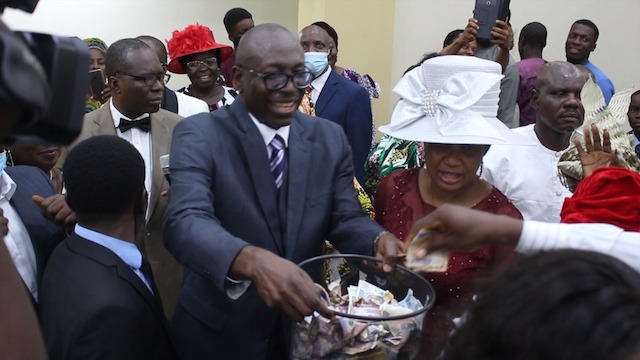 He said this at a Special Thanksgiving Service held in his Parish of the Redeemed Christian Church of God, RCCG, Soul Winners Assembly, in Benin City on Sunday.

He said he chose to express gratitude to God for the exercise, as well as immensely thank supporters and those who assisted him.

As he said God expects Man to offer him praises in all situations.

The APC Governorship Candidate, whose sermon was titled “Utilising Opportunities”, said every opportunity must be seized to achieve an aim.

On the outcome of the Election, Pastor Ize-Iyamu noted that defeat is an imagined state, and that since the exercise he had not felt defeated.

Furthermore, he admonished his supporters not to allow the seed of defeat germinate amongst them, as God has decreed that all the “Earth is theirs”.

The minister additionally encouraged his members to heed God’s caution in Thessalonians 5:16-18 that true believers do not “give away to grief’, ‘rejoice evermore’ and ‘pray without ceasing’ as he (God) only can determine the future.”

The Edo State Regional Pastor of the RCCG, Professor Dele Balogun, also urged supporters of Pastor Ize-Iyamu not to lose focus as God may allow them to lose a battle and later win the war to test their faith.