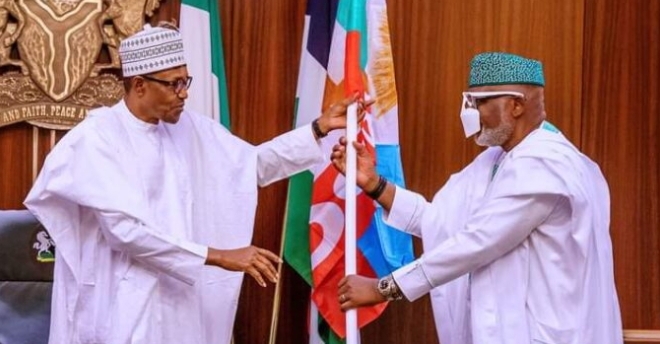 The gubernatorial election in the south-west state has been scheduled for October 10.

Recall that the flagbearer of the ruling All Progressives Congress (APC), Akeredolu had earlier defeated Eyitayo Jegede, candidate of the Peoples Democratic Party (PDP).

President Buhari in a series of tweets on Wednesday said he is confident of Akeredolu’s victory in the election.

The president who noted that he is proud of the governor’s achievements in office, said he deserves to be re-elected.

Buhari praised Akeredolu for his utilisation of available resources, adding that the candidate is a good brand for the party.

“I have no doubt that Governor Rotimi Akeredolu is a good brand for the APC to market. I am particularly delighted by his ingenious approach to governance. His performance within the limits of available resources is endearing,” he said.

“Governor Akeredolu deserves to be re-elected to consolidate the good work he commenced in his first term. I am not just proud of his achievements; I am confident he will enjoy the mandate of the good people of Ondo State for the second term.”