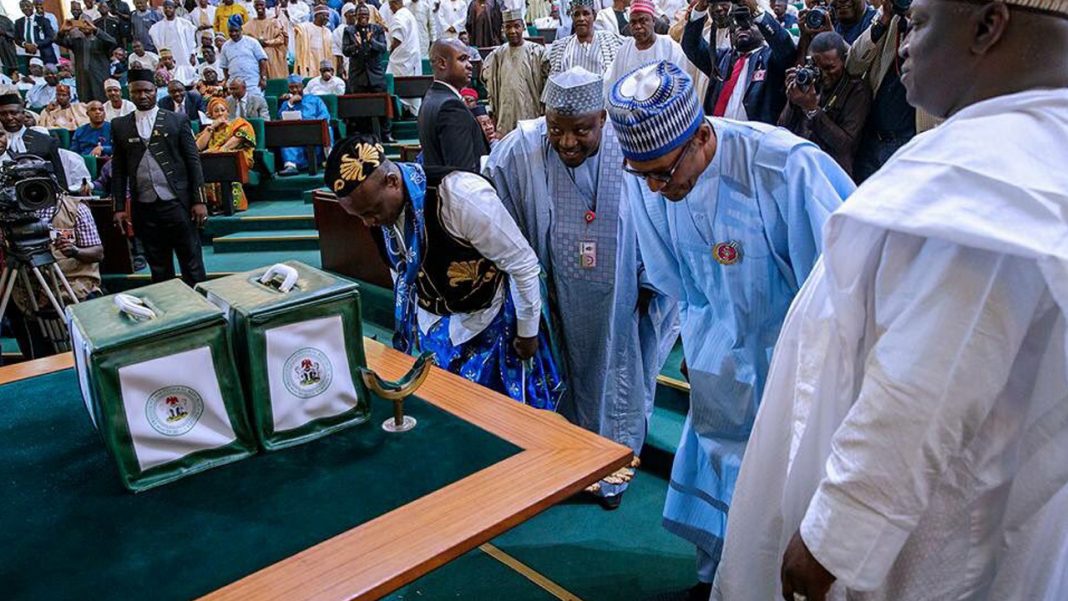 This is according to the 2021 budget proposal presented to the National Assembly on Thursday by President Muhammadu Buhari.

The President. Major General Muhammadu Buhari (retd.), laying the 2021 Appropriation Bill to a joint session of the National Assembly in Abuja on Thursday (8/10/20). Photo: Olatunji Obasa

The Nigerian Government has budgeted N9.2bn budget for the renovation of the National Assembly complex, report have shown.

According to The PUNCH, this is according to the 2021 budget proposal presented to the National Assembly on Thursday by President Muhammadu Buhari.

The project, which is being implemented by the Federal Capital Territory Administration, was tagged as an ‘ongoing’ one.

The budget for the maintenance of the Presidential fleet also rose from N8.5bn in 2020 to N12.5bn in the 2021 budget amid calls for the Presidency to reduce the number of aircraft in the fleet.

The Presidential fleet, which is used to convey the President, has also in recent time been used to fly members of his family to personal functions.

Buhari and Vice-President Yemi Osinbajo are also expected to spend N3.2bn for travels next year.

While N2.4bn was set aside for Buhari’s travels, N801m was earmarked for the Vice-President.

The Federal Government also set aside N2.3bn for the payment of entitlements of former heads of states, Presidents and Vice-Presidents.

A further breakdown of the allocation to the Presidential Air Fleet in the fiscal document shows that N2.4bn will be spent on overhauling of Gulfstream G550, Falcon 7X and CL 605 aircraft engines N2.4bn.

The spending is marked as a new project.

Another new project for the PAF is the purchase of AW 139 helicopter gear box which is expected to gulp N1.65bn.

The overhauling of Challenger 605 and Hawker 4000 aircraft landing gears will cost the government N1.1bn.

Another new project is what is termed “ompliance with mandatory upgrades on PAF aircraft” and N1.8bn was appropriated for it.

This is apart from the N1bn voted for maintenance of aircraft and the N250m allocated to aircraft fuel.

For the budget of the Secretary to the Government of the Federation, N500m will be spent on the procurement of treated vehicles for the pool of former Heads of State and former Vice Presidents while N212m will be spent Independence Day and Democracy Day

Meanwhile former Vice President Atiku Abubakar has taken a swipe at the N13.08tn 2021 budget proposal submitted to the National Assembly by the President, Major General Muhammadu Buhari (retd.), on Thursday.

Atiku said proposals contained in the document contravene critical sections of the Fiscal Responsibility Act as such, the president and his team should recall and rework the document in the interest of the nation and its economy.

The former Vice President’s position was contained in a statement titled “The 2021 Budget Proposal Contravenes The Fiscal Responsibility Act,” he signed and made available to newsmen in Abuja, on Friday.

He said, “I call on the President, to recall this budget, and recalibrate it to reflect the provisions of the Fiscal Responsibility Act of 2007, and the current economic realities of the nation. To do otherwise will not only be unpatriotic, it will also be catastrophic for our nation’s economy.”

According to him, a careful study of the 2021 budget raises a number of “very grave and perhaps, disturbing issues” which he noted that space and time constraints made it difficult for him to list them all in a single intervention.