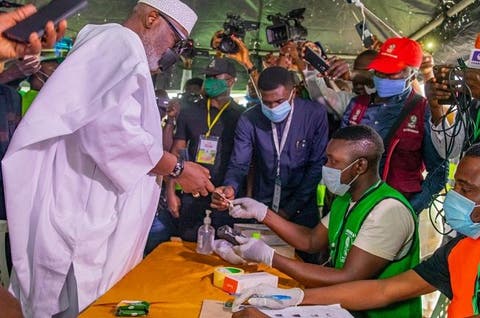 He arrived at Polling Unit 6, Ward 5 at Isokub in the Ijebu Owo area of the state.

Dressed in a white agbada, the governor arrived at the unit at 9:37am after the rain which started around 07:50am had stopped.

He was not allowed to join the queue as he was ushered to where he was accredited together with his wife, Betty, after which they cast their ballots. The first family didn’t spend more than seven minutes at the unit.

Addressing journalists after casting his vote, Akeredolu, who is seeking reelection as the governor of the state, said God would give him victory.

He said although the early morning rain disrupted the exercise, people have started coming out.

Akeredolu said, “I am confident about winning this election. I have always said that mine is about God. I know that God in his infinite mercy will give me victory. My confidence is in God.”