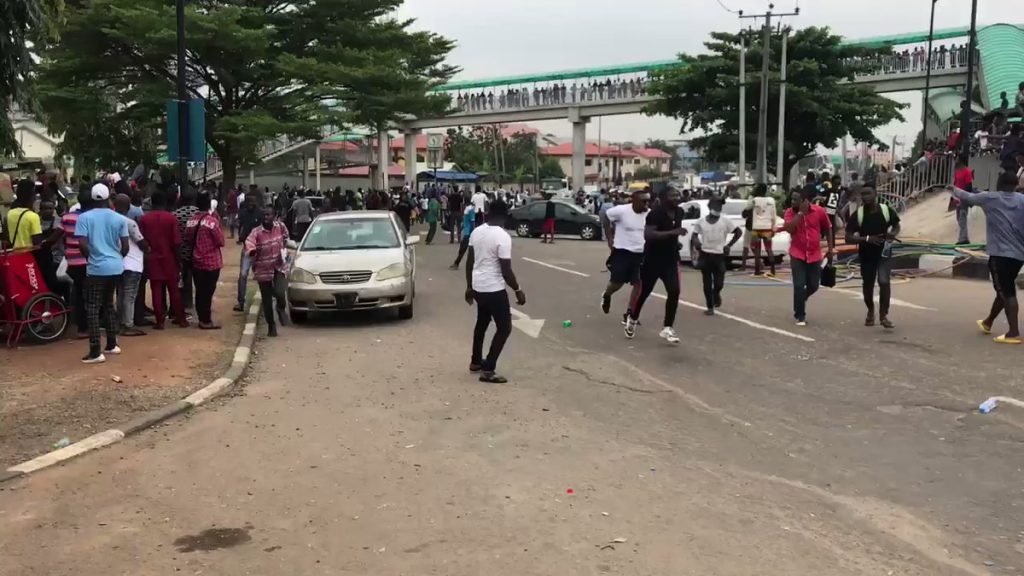 On Thursday, October 15, as the #EndSARS protests across the country were ongoing, scores of hoodlums, hijacked the protests in Ikeja, Lagos thereby disrupting it.

The protesters rose from Lagos State House of Assembly as early as 7am, to barricade Lagos/Ibadan Expressway and prevented vehicular movement on the expressway.

However, some hoodlums surfaced from nowhere wielding dangerous weapons to intimidate the protesters.

As at the time of this report, the protesters were scampering for safety.

Recall that just yesterday, a similar event occurred in Abuja, as a group of pro-SARS protesters who are believed to be thugs attacked #EndSARS protesters at the Berger junction of the city.

I don't know what's wrong with lagos thugs …instead of them to just collect whatever they are given and flex with it than to just scatter peaceful protest #Anonymous #NASSPayCutNow #EndSWAT #EndSARS pic.twitter.com/HQpDDhxa5q

Reports coming in that more thugs have been mobilized to attack Lagos & Abuja protesters today. Please be careful and stay at alert!!

The ongoing protest is against the new unit known as Special Weapons and Tactics (SWAT) Team which will fill the gaps arising from the dissolution of the defunct SARS.

Last Sunday, the Inspector General of Police Mohammed Adamu disbanded the Special Anti-Robbery Squad (SARS) due to alleged extra-judicial killings, wanton arrests and dispossession of property through physical assault and other intimidation tactics.