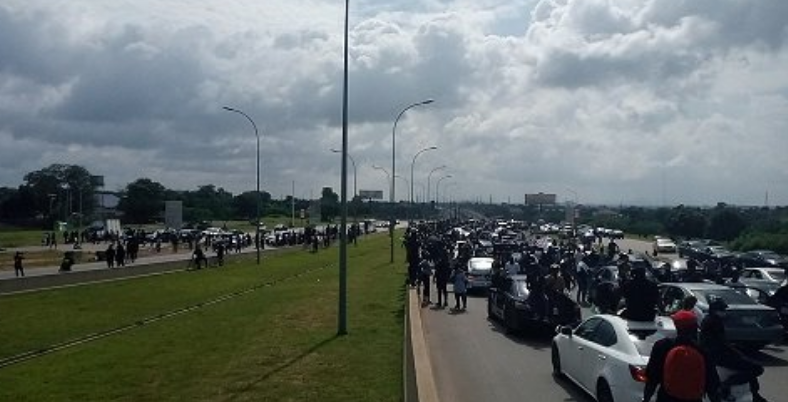 As the #EndSARS protests continue in most cities in the country and some parts of the world where Nigerians are based, some very defiant #EndSARS protesters continued their agitation today along the Abuja-Keffi road.

The protesters blocked the Abuja-Keffi road in continuation of the agitations against alleged harassment and molestation by operatives of the disbanded Special Anti-Robbery Squad(SARS).

The development is making it difficult for commuters and motorists to go about their normal businesses.

On Friday, they converged on the City Gate and shut down the Nnamdi Azikiwe International Airport Road, Abuja.

The demonstrators were singing solitary songs and chanting endSARS in Nigeria as they marched on the road.

The Inspector-General of Police, Mohammed Adamu, announced October 11, that the Federal Special Anti-Robbery Squad (FSARS) of the Nigeria Police Force has been dissolved nationwide and operatives will be redeployed to other police formations and commands.

READ  Children enjoying a swim in Oba of Lagos’ pool after hoodlums vandalised his palace (photos & video)
Share this Post[?]