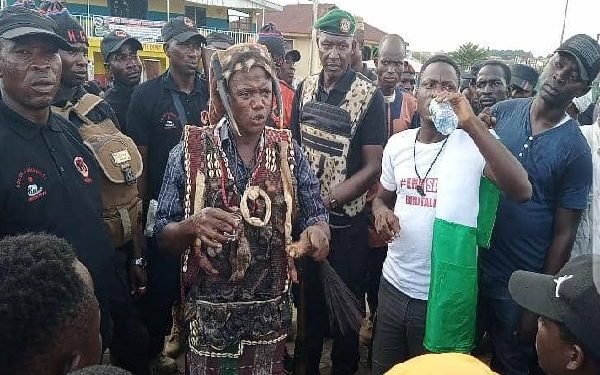 Scores of armed hunters on Tuesday, joined the #EndSARS protesters to provide security cover and prevent the infiltration of their ranks by hoodlums and thugs.

The hunters, who also wore charms, expressed their solidarity with the protesters .

The leader of the hunters, Mr Nureni Adisa, who spoke at the popular Orita-Olaiya Junction in Osogbo, said their aim was to ensure that the protest was not hijacked by hoodlums and to also prevent any loss of lives and property.

Adisa urged the protesters to be vigilant and alert to forestall miscreants and hoodlums infiltrating into their midst, and to identify any suspicious persons whose aim was to foment trouble.
He condemned the recent attack on the convoy of the state governor by suspected thugs in order to discredit the peaceful protest and cause havoc.

Adisa also appealed to the protesters to ensure civility and orderliness in their protest and not to take laws into their hands .

Protesters gathered at the Orita-Olaiya junction singing solidarity songs and carrying placards calling for an end to police brutality and extrajudicial killings .

The spokesman for the protesters, Mr Adebisi Emmanuel, assured that the protesters would not take laws into their hands and promised not to allow the protest to be hijacked by hoodlums or sponsored thugs .

READ  Nnamdi Kanu reveals why ‘Buhari double’ is still in Aso Rock, tells Nigerians what to do
Share this Post[?]