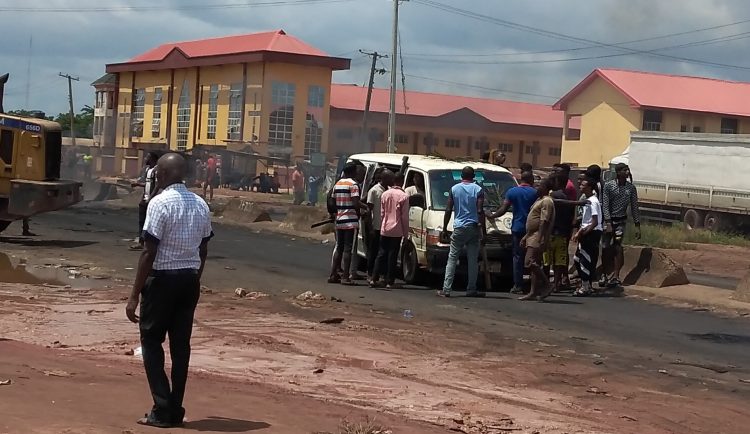 Hundreds of #EndSARS protesters in Edo State on Tuesday defied the 24-hour curfew imposed by the state government, as they took to major roads and streets of Benin city.

The protesters mounted roadblocks and made bonfires at about 30 meters intervals, messing up the entire stretch of the roads.

Hundreds of residents who also ignored the curfew were seen heading to various directions.

Recalcitrant motorists were made to pay for their passage at every roadblock by stern-looking youths who wielded iron rods, wooden clubs and other dangerous weapons.

A motorist who volunteered comment on condition of anonymity, said he paid N200 at every point.

“I’m trying to find my way to Agbor. I’ve been paying N200 at every roadblock mounted by the boys. And as you can see, there are still many more before the by-pass,” he said.

Some youths were seen along the Benin/Agbor road, with a coffin, saying that they were “burying the present federal government with its bad policies.”

Commercial motorcyclists who risked conveying passengers, charge N2,500 for a ride from Jehovah Junction to Ramat Park, a journey that cost N80 on a normal day.

The story was not different in other parts of the Benin metropolis.

Protesters extort money from a motorist

The state government could not be reached to get clarification on why implementation of the curfew order failed.

Recall that two persons suspected to be cult members were killed on Monday by rival cult groups who took advantage of the #EndSARS protest to unleash mayhem on the areas.

A source who spoke to our correspondent on phone, said residents of the areas were mostly indoors, perhaps avoiding being caught in the cross fire of the rival cult groups.