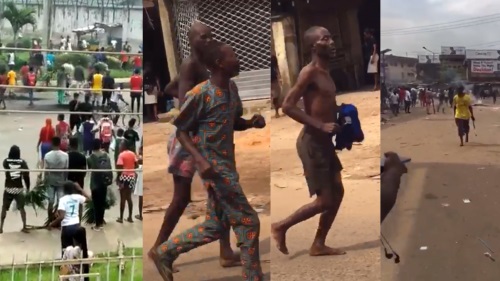 The revelations of an unidentified escapee from the latest Benin jail break have brought to the fore not only the injustice and rot in our nation’s judicial, policing and correctional system but also how citizens spent years in jail awaiting trial, some even dying in the process without seeking justice..

As reported by Sahara Reporters one of the escapees, who cashed in on the jail break today to escape, as hoodlums broke into Oko Prison along Sapele road in Benin City and set more than two thousand inmates free, told residents while fleeing that he had been awaiting trial for over two years without his case ever coming up for hearing.

The escapee said though the Investigating Police Officer handling the case collected money from him, he never investigated the matter, leaving the authorities to throw him in jail.

However, while scurrying away from the scene, he rained curses at the policeman behind his ordeal.

Intriguing? Wait for this. That escapee is just one of the numerous inmates awaiting trial endlessly in Nigerian prisons.

A report by Nigeria Bureau of Statistics also said between 2011 and 2015 72 .5 per cent of Nigeria’s otal prison population are inmates awaiting trial without being sentenced.

Ahmed also reiterated the need for the decongestion of the prisons since they are overcrowded.

However the Muhammadu Buhari administration has started carrying out prison reforms, which include speedy trial processes, granting pardons and amnesty to prisoners. In April this year, 70 inmates, including 39 federal offenders were released from incarceration.

While announcing the pardon, the Minister of Interior, Rauf Aregbesola, explained that the president had also approved the release of 2,600 inmates across various correctional centres in the country.

Still, the confessions of the escapee from the Benin Prison shows a lot still needs to be done, as many inmates are still being detained in Nigeria prisons awaiting trial that may never come.

It has also brought the need not just for speedy reforms but also the speedy trial of inmates to the fore. Until this is done many inmates may wallow in prison without access to fair hearing and justice.

Hoodlums cashed in on the #EndSARS protest in Benin and broke into the Oko Correctional facility earlier today and set more than two thousand inmates free, leaving about nine dead.

The hoodlums also went ahead and burnt down Ugbekun police station. However, this is not the first time the Benin prison has been broken into.

In 2014, unknown gunmen suspected to be armed robbers broke into the correctional centre and set inmates free.