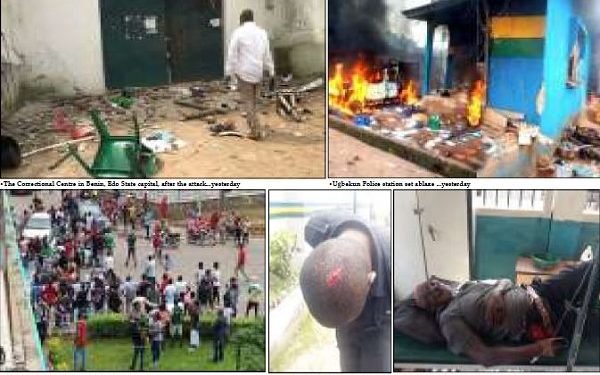 The #EndSARS protest took a violent turn on Monday as it spread across the country.

Business activities were disrupted and cities shut down.

There was no business activity in major part of Lagos, the country’s commercial capital, as protesters locked down the major roads, preventing people from getting to their offices and business places.

The secretariat of the State government in Alausa, Ikeja, was closed down when protesters chased away civil servants. It was the same situation at the House of Assembly.

The 19 injured policemen sustained serious injuries after the attack at Adekunle in Yaba.

Another set of RRS personnel escaped unhurt when they were attacked in Ijanikin.

The injured were among the 97 policemen heading for their various duty posts in an RRS truck.

A video footage of the Adekunle incident showed some of the policemen fleeing to safety as the attackers threw stones, bottles and missiles at them.

The protesters vandalised many vehicles between Adekunle and Ebute Meta, shouting “No Police! No Police.”

The protesters took their action to the Murtala Muhammed Airport – the nation’s foremost facility – chanting slogans.

The youths numbering over a hundred, marched along the road leading to the terminal building , but did not gain access into the facility.

Officials declined to comment on the development, which did not affect operations of airlines.

Men of the Rapid Respond Squad (RRS) of the police in Lagos were attacked by the protesters. Many were injured.

In Benin, two police stations and a police post, were burnt down. Two prisons (Correctional Centres) were attacked to free no fewer than 500 inmates.

The armoury was looted, police uniforms stolen while nine of the inmates who were making their way to escape were shot dead.

The Edo State government slammed a 24-hour curfew on the state to restore normalcy.

In Abuja, many people were injured and vehicles damaged when anti-and pro-SARS protesters clashed.

No fewer than two persons were feared killed yesterday as mayhem broke out at the Apo Mechanic Village in Abuja, when suspected hoodlums hijacked the #ENDSARS protests, attacking people randomly and setting several many ablaze.

According to a witness, the incident happened after a horde of thugs were conveyed to the area in a large truck to disrupt the protests.

The witness, who lives in the nearby village of Apo Pigba, said the thugs armed with machetes, sticks and other crude weapons, attacked the protesters and anyone else in sight.

A protester, Anthony Onome Unuode, who was attacked along Kubwa Road on Saturday, died of the injuries he sustained yesterday.

Commissioner of Police Bala Ciroma has ordered an investigation into his death. He also condemned the clash between the EndSARS and pro-SARS protesters and called for calm.

There was heavy presence of soldiers in Abuja around the Federal Secretariat and the Three Arms Zone. The #EndSARS protesters barricaded the Abuja- Keffi Road, causing diversion from the route.

Security operatives dislodged protesters that blocked the AYA Junction, Asokoro end of the major road that connects the Federal Capital Territory (FCT) with the Northcentral, Northeast and Southeast.

There were pockets of protests at the Secretariat Junction in Ado on the Nasarawa State side of the road. Pedestrians were stranded.

The protesters blocked the Airport Road, preventing motorists and commuters from plying the road.

Many workers and others going out for their daily businesses stranded.

Commercial and private vehicles were prevented from going to the city centre.

It was learnt that residents of Bwari had to use the old Sabon Wuse road to get to their destinations.

Following continued protests and disruption of economic and social activities in Abuja, the Indigenous people of the Federal Capital Territory (FCT) urged the #EndSARS demonstrators to vacate major roads in the territory.

The indigenes also expressed displeasure and anger at the needless deaths recorded during the ongoing protests in the Territory.

In a letter signed by Yusuf Yunusa, the Buhu Brukunu FCT, and addressed to the Office of the Inspector General of the Police (IGP), Mohammed Adamu, the FCT indigenous people said FCT residents were frustrated and losing their tempers.

They complained that countless “farm products had been spoilt due to the blockages; daily earners are starved because their customers can no longer reach them; low patronage of businesses have occurred; families have suffered, including toddlers and students, when they have spent countless hours in traffic caused by these blockages.”

The bullion van and two police escorts were attached at Ola-Iya junction in Osogbo, the state capital as the vehicle approached the junction from Fagbewesa street to join the highway.

They hurdle stones and missile at the van and the escorts until they raced away.

The protesters also vowed to shut schools and commercial activities in the state to further strengthen agitation against police brutality.

They thronged Osogbo streets, barricading Ola-Iya junction, where Governor Adegboyega Oyetola was attacked at the weekend.

One of the leaders of the protesters, Olawale Bakare, while addressing others said they would ensure that all markets and commercial activities were shut to further drive home their demands.

They freed over 1,500 inmates, including 120 condemned criminals.

Nine of the escaping inmates were shot dead at Oko Medium Correctional Centre by guards on duty.

Many vehicles were burnt. The armoury looted, many AK-47 rifles, ammunition and police uniforms were stolen.

The attackers overpowered the five fully-armed guards on duty and looted the shops near the centre, while they also carted away valuables from the offices of officials of the correctional centre, many of who sustained varying degrees of injuries from machete cuts and gunshots, during the attack.

The protesters initially made bonfires on the Benin-Sapele-Warri Road and barricaded the road with heavy logs of wood, but the hoodlums moved towards the correctional centre, broke part of the wall, to allow the inmates to escape.

One of the freed inmates was rearrested.

The marauding hoodlums also destroyed valuable property worth millions of naira at the High Court Four, which is near the correctional centre on Sapele road, before the security agents arrived.

Banks, shops and schools, among others in Upper Sokponba and most parts of Benin, hurriedly closed, to avoid looting and attack.

Oko Medium Correctional Centre has a capacity for 1,300 inmates, but as at the time of yesterday’s attack, over 1,500 inmates were at the facility.

An official of Oko Medium Correctional Centre, said the inmates were already rioting before the attack.

The government subsequently imposed a 24-hour curfew till further notice. It vowed to decisively deal with errant residents who flout the directive.

Secretary to the State Government (SSG), Osarodion Ogie said: “This (indefinite curfew) decision has become necessary, because of the very disturbing incidents of vandalism and attacks on private individuals and institutions by hoodlums in the guise of #ENDSARS protests.

”While the government of Edo State respects the rights of its citizens to undertake legitimate protests, it cannot sit idly when hoodlums have taken laws into their own hands to cause mayhem on innocent citizens and the state.

”By the directive, schools and businesses are to shut down activities accordingly. Those who cannot move safely are to stay put between now and 4 p.m. till calmness is restored.

”Parents and guardians are advised to rein in their children, wards and the youths, to forestall further breakdown of law and order.”

Obaseki also stated that the responsibility of government was to protect lives and property, as well as to maintain law and order, while declaring that anyone found outside in violation of the curfew would be dealt with according to the law.

The Police expressed regret over the attack on its facilities in Benin.

”The extent of damage cannot be ascertained at the moment but report indicates that the protesters carted away arms and ammunition from the armoury and freed the suspects in custody before setting some of the facilities ablaze.

”The Force is doing everything possible at the moment to bring the situation under control, protect lives of innocent citizens and prevent further attacks on any other critical infrastructure in the state.

”The Force is calling on parents/guardians to prevail on their children/wards to desist.”