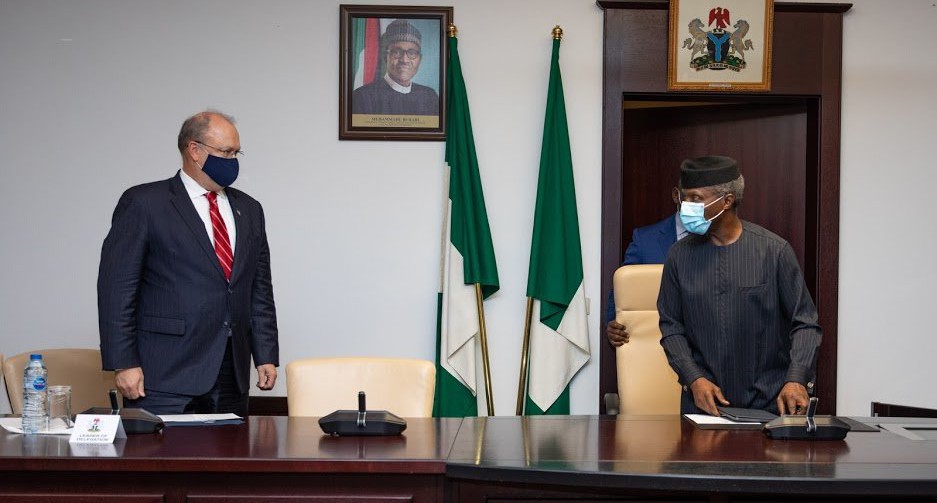 A United States representative, Counselor T. Ulrich Brechbühl, has met with Vice President Professor Yemi Osinbajo on the ongoing violence in Nigeria as a result of the agitations over police brutality.

Brechbuhl conveyed the regards of the Secretary of State Mike Pompeo.

Pompeo had issued a statement on the situation in Nigeria.

“Secretary Pompeo asked us to come as friends and partners of Nigeria to examine the drivers of insecurity across the country and to better understand conflict mitigation efforts already underway so that we can explore ways to enhance our cooperation,” Brechbuhl said.

The meeting was part of a previously scheduled delegation, which included Assistant Secretary Robert Destro and Assistant Secretary Denise Natali, to raise U.S. concerns about the ongoing violence in Nigeria, human rights, religious freedom, and trafficking in persons, and to hear from senior Nigerian Government officials how they are addressing those issues.

An American government official spokesperson Morgan Ortagus in a statement expressed the United States condemnation of the “of the use of excessive force by military forces who fired on unarmed demonstrators in Lagos.”

He also expressed condolences to the victims of these shootings and urged the government of Nigeria to abide by its commitment to hold those responsible accountable under the law.

“The Vice President and the Counselor noted that the right to peaceful assembly and freedom of expression are essential human rights and core democratic principles.

“Counsellor Brechbühl and Vice President Osinbajo emphasised the importance of US. and Nigerian collaboration on common goals of improving security cooperation and strengthening economic partnership to foster mutual prosperity,” the statement revealed.