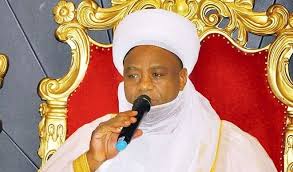 Alhaji Abubakar Sa’ad III-led Jama’atu Nasril Islam, the Sultan of Sokoto has joined prominent Nigerians to condemn the attack on #EndSARS protesters by soldiers in Lagos.

The spiritual leader of Nigerian Muslims decried the hijack of a peaceful protest by hoodlums which had resulted into killings and destructions of property.

The Sultan of Sokoto appealed to the Federal Government to apply wisdom and maturity in handling the crisis.

This was contained in a statement made by the Sultan through the Secretary General of the JNI, Dr. Khalid Abubakar Aliyu in Kaduna on Thursday.

In the statement titled, #EndSARS imbroglio: general appeal for calm,’ the religious body, also appealed to genuine protesters to withdraw from the streets.

The statement read in part, “The agitation for the #EndSars borne out of concern for the lives of Nigerians against the excesses of some of the members of the special police unit has since been hijacked by miscreants who have been looking for such opportunities to settle scores with their adversaries within the police and/or politicians.

“These miscreants are now the driving force of the #EndSars protest. Hence, the attacks on lives and properties as well as looting and arsons thereby creating serious pandemonium which is completely at variance with the objectives of the #EndSars conveners.