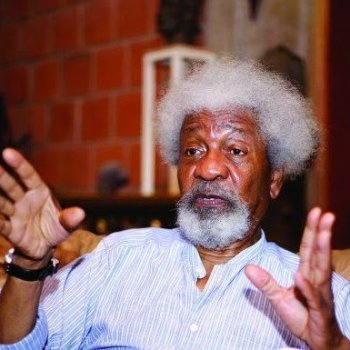 Professor Wole Soyinka has called on Igbo indigenes to ignore threats requesting them to leave Yorubaland.

This is coming hours after a UK-based Nigerian, Grandson Adeyinka in a video which has gone viral called on Igbo indigenes to leave south-west states.

Recall that UK-based Nigerian, Grandson in August 2019 was arrested in London for allegedly “stirring racial discrimination” against the Igbo and Fulani ethnic groups and also “encouraging terrorism”.

In a recent video, Adeyinka issued a 48-hour ultimatum to the Igbo, warning that those who refuse to leave will be dealt with.

“This is a warning to the Igbo people in Yorubaland. We are giving you a 48-hour ultimatum from today, Friday 23rd October, 2020 until Sunday, 25th of October, 2020 to leave Yorubaland,” he said.

“From Monday 26th of October, we will close the roads, stop all the vehicles across Yorubaland and every Igbo national will be dealt with accordingly. What happened at Ore in Ondo state in August 1967 are just highlights of what we are going to do from Monday, 26th October, 2020.”

Look at what my mom just sent me this early morning. With plenty texts/ calls that I should start packing my things. Who is this man, and someone please tell him to stfu!! We’re exhausted already! Not this abeg🤦🏽‍♀️ #EndSARS pic.twitter.com/WBU3PLbaZx

In August 1967, there was a mid-west invasion (operation torch) in Ondo state between Nigerian and Biafran military forces during the civil war.

Reacting to the video on Saturday via a statement, Soyinka condemned the video, saying the threat “is the work of sick, cowardly minds”.

The professor of literature said Igbo indigenes should avoid being threatened by some persons who seek to create disharmony in the country.

“Undoubtedly in order to promote the video clip of an ethnic revanchist calling on Igbo to leave Yoruba land, this same lunatic fringe has exhumed, and embarked on circulating an ancient fabrication – several years mouldering in the grave – once attributed to me and vigorously denounced,” the statement read.

“That statement impudently expounds, as my utterance, what the Hausa want, what the Yoruba want, and what the Igbo want.

“Such an attribution – let me once again reiterate – is the work of sick, cowardly minds that are ashamed, or lack the courage, as the saying goes, “to answer their fathers’ names.” At least the current ethnic rabble-rouser has the courage of his convictions, not so the sick brigade of identity thieves.

“Normally, one should totally ignore the social dregs. However, in the present atmosphere where FAKE NEWS is so easily swallowed and acted upon without reflection, I feel once again obliged to denounce this recurrent obscenity.

“As for our brother and sister Igbo, I hope they have learnt to ignore the toxic bilge under which some Nigerian imbeciles seek to drown the nation.

“It is time also, I believe, to also enter the following admonition: one cannot continue to monitor and respond to the concoctions of these addicts of falsehood, and their assiduous promoters who have yet to learn to wipe the filth off their tablets.

“The patrons of social platforms should develop the art of discrimination. Some attributions are simply so gross that, to grant them even a moment’s latitude of probability diminishes the civic intelligence of the recipient.”