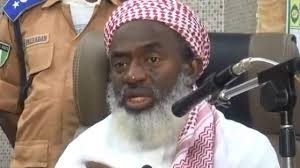 Prominent Islamic scholar, Sheikh Ahmad Abubakar Gumi has submitted that nothing is working in Nigeria because the country’s leaders are sleeping.

Adding that the leaders need to be awakened from their deep slumber, Sheik Gumi noted that the #EndSARS protest is not just about police reforms or the disbandment of the Special Anti-Robbery Squad (SARS).

He noted that the protest is a wake-up call for those in leadership positions to wake up to their responsibilities.

Gumi added that current happenings in the country are warnings from Allah for those in government and urged them to disconnect from sycophants telling them they are doing well.

The cleric made his views known in a recent interview with one of the Northern-based privately-owned newspaper outfits in Kaduna State.

He said: “We have provoked Allah and sadly the leaders are still using the option of force that can never work instead of addressing the real genesis; come back to Allah, address issues of poverty, unemployment and make those in the position of authority and responsibility to be accountable.

“The government should be told that they are sleeping. Nothing is working in Nigeria. The #EndSARS protests has its genesis, it is the result of bad governance otherwise there won’t be a protest in the first place.

“It is true that the protests have been infiltrated and the legitimate demands altered and it is the government that benefits from this. We all must understand that the reforms Nigerians are yearning for are not in any way limited to the disbanding of a unit in the Police.

“The whole country needs a total overhaul from the military, the police, the economy, the legislature and all strata of government. There is, in fact, no unit of the government that is not supposed to be reformed.

“The government must be told the truth and be awakened from its deep slumber. Enough of the sycophancy from the ruling elites and others of like minds. It should be told that all the blood being spilled on the land leaders and they will surely account for it before Allah.

“Nobody should tell you that protests of this nature as long as they are peaceful are unlawful; the government needs to be awakened anyhow and doing this is also Jihad.

“Prophet Muhammad (SAW) said the best Jihad is that when a person finds the courage and strong will to stand, face those in the position of authority and tell them to look what you are doing is wrong.

“Any government that cannot tolerate being corrected is not a good government. Do they receive special massages from Allah? No, they don’t. So they must listen and take advice.

He however condemned the hijack of the #EndSARS protests by hoodlums which has resulted in looting, vandalization, and arson in some cities, saying the protests should remain peaceful.

“What is important is that all such things abhorred by Islam like killings, looting and even abuses must not form part of the protests. There must be decency and decorum in any protest,” Gumi said.

The Islamic scholar added that in the interview that killings and kidnappings are still prevalent in the Northern part of the country, but youth leaders are been threatened to keep silent.

READ  Osinbajo Urges The Church To Pray For Survival, Progress Of Nigeria

Gummi said: “It is not acceptable that people are being killed, kidnapped and left in severe pain, misery and yet cannot talk.”

“Just yesterday, about 27 people were killed again in Zamfara, in continuation of series of daily killings. Not long ago, I came back from Sokoto, they told me that about 79 people were murdered in cold blood. On daily basis you hear about people being killed, women and girls raped, and there is hunger, squalor while many cannot go to school.

He added that the general insecurity has prevented many people and farmers from going to their farms while the government keeps deceiving itself that it is achieving food security.