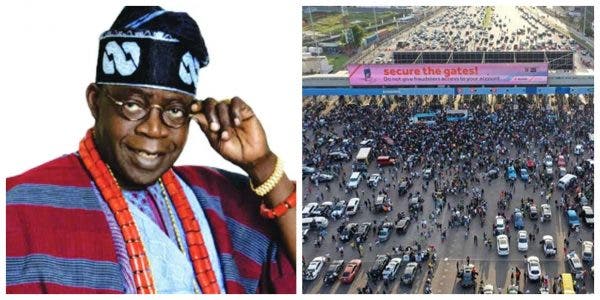 The national leader of the All Progressives Congress (APC), Bola Tinubu has reiterated that he has no hand in the shooting of protesters and also declared that he has no investment in Lekki toll gate.

This was contained in a statement released by the former governor of Lagos on Sunday.

Tinubu said he could not have deployed the soldiers to quell the protest and fail to protect his investments — Television Continental (TVC) and The Nation newspaper.

Recall that soldiers on Tuesday opened fire on #EndSARS protesters at the Lekki tollgate, and this sparked off an outrage in Nigeria and across the world.

Angered or driven by the incident, a mob including women invaded TVC and The Nation among other protesters vandalised across Lagos state.

Tinubu described the claim that he “called on soldiers to kill my own people” as the “foulest of lies”.

“The use of strong force against any peaceful protester is indefensible, completely outside the norms of a democratic society and progressive political culture to which I aspire and have devoted my public life. That people were angered by the reports of violence and death is acutely understandable,” he said.

“Understandably outraged, people sought to hold someone accountable. For various reasons, I became the most available scapegoat. Some people don’t like me because they believe the false rumours uttered about me over the years. Some maligned my name because they hide ulterior motives and harbour unrequited political scores they intend to settle.

“My opponents have every right to oppose me politically but let them have the courage to do so in the open, above board and to employ facts not evil fiction in their efforts against me. They have no right to slander and defame anyone with the terrible and vile fabrications now cast at my feet.”

The former governor said while he has no investment in the tollgate as alleged, he is a “promoter and financial investor in The Nation and TVC”, both of which he learnt would be attacked amid the protests.

He said the attackers were from his political opponents, and had “wreaked their havoc and destroyed those buildings and facilities” at TVC and The Nation.

“There is no rationale that can adequately explain why I would order soldiers to repel peaceful protesters from the toll gate where I have no financial interest, yet, choose to do nothing to protect my investments in The Nation and TVC,” he said.

“The good and creative people of Lagos have worked hard over the years to build it into the dynamic economic and cultural focal point it has become. Lagos has enjoyed over two decades of sustained, uninterrupted growth.”

The APC leader also urged the state government to donate revenue from the tollgate to the victims of the Lekki attack as well as to other identifiable victims of police brutality in Lagos.