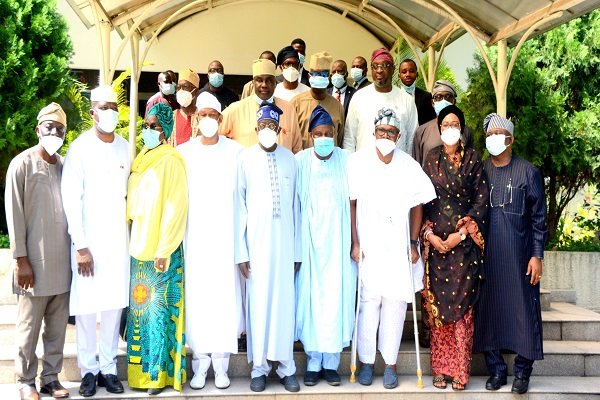 Seventeen senators representing the six Southwest states were in Lagos on Tuesday. They came to assess the destruction of public infrastructure and private properties by hoodlums who hijacked the #EndSARS protests.

They said the burden would be too heavy for the state government to shoulder alone and promised to push for federal help in rebuilding Lagos – Nigeria’s commercial and industrial nerve centre.

The senators’ pledge got the backing of the Forum of former Permanent Secretaries in Lagos.

Forum Chairman and one-time permanent secretary in the Ministry of Finance Mohammed Olagbaye urged the Federal Government to extend assistance to the state.

Leader of the Southwest Caucus and Ondo North Senator Ajayi Boroffice gave the assurance of prevailing on the Senate to make a case for the state.

Boroffice, who is also the Deputy Senate Leader, said the Senate would urge the Federal Government to assist the Lagos government financially to cushion the effect of the damage inflicted on the state by hoodlums.

The senator, who described the destruction as “orchestrated tragedy”, said: “The damage done cannot be handled by Lagos alone. We are going to move a motion to urge the Federal Government to come to the assistance of Lagos State”

Boroffice wondered why the protests festered and allowed to degenerate into violence after the federal government had agreed to protesters’ five-point demands.

The lawmaker expressed worry that many youths working in the businesses that were destroyed would become jobless, adding that it would take time for the owners of those businesses to recover, given the extent of loss.

He told Governor Babajide Sanwo-Olu that “members of the Southwest caucus in the Senate are here to console you on the demonic violence unleashed on Lagos.

“The government and private individuals suffered incalculable loses in the unfortunate destruction that trailed the #EndSARS protest. No Nigerian is against peaceful protest, but demonstration that the protesters did not have a leadership will encourage hoodlums to hijack and wreak havoc.

“Adequate decision had been taken by the government to attend to the demands of the protesters. Of course, some of the demands require constitutional amendment and cannot be done immediately.

“The Senate showed its readiness to look into the issues with the necessary amendments. So, it was unnecessary for the protest to be prolonged to the point of being hijacked by those with violent agenda.”

On how the Caucus plans to intervene, Boroffice said the burden occasioned by the destruction cannot be shouldered by the state alone, stressing that he and his colleagues would be meeting with the leadership of the National Assembly to prevail on the Federal Government in assisting the State to recover and rebuild.

READ  200 US-Based Nigerians Are Willing To Be Evacuated To Nigeria, Minister Of Foreign Affairs, Geoffery Onyeama

He added that the Caucus would move a motion that would enable the Ministry of Foreign Affairs to catalogue the ugly images from the destruction and send to Nigerian embassies overseas for those in the Diaspora to see proportion of damage wreaked.

The Ondo senator said: “We are concerned about the gravity of the damage on public properties in Lagos and other places across the country.

“We will be moving a motion in the Senate to urge the Federal Government to come with assistance to Lagos State, because the burden of the destruction is too much for Lagos to bear alone.”

Sanwo-Olu thanked the lawmakers for showing solidarity, saying that law-abiding residents had suffered from the violence and borne the brunt in harsh way.

The governor expressed concern that some Lagos communities are now vulnerable to crimes, following the arsonist attacks on police stations and facilities housing security operatives.

He reiterated his condemnation of the shooting of protesters at the Lekki Toll Plaza by soldiers, insisting that until after a thorough investigation, no one would know how many lives were lost in the incident as against misinformation being spread through the social media.