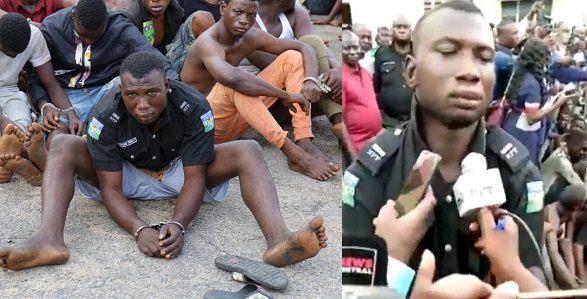 Following his participation in attacking and setting a police station ablaze in Lagos state, a hoodlum has been arrested. He was arrested while rocking the uniform of a DPO.

He was paraded before newsmen by the Lagos state police command today October 27.

In other news, one Corporal, Omoh F, has been arrested by the 9 Brigade of the Nigerian Army after he was caught on video flogging a woman at an Oshodi branch of the United Bank of Africa in Lagos.

The Spokesman for the 9 Brigade, Major Olaniyi Osoba, confirmed this to The Punch on Monday. ”I can confirm to you that he has been detained and investigations are ongoing,” he said.

Recall a lady tweeted on Monday how she was flogged with a belt by the corporal. Tweeting with her handle, @vels20, she alleged that the soldier had tried to jump an ATM queue but she challenged him.