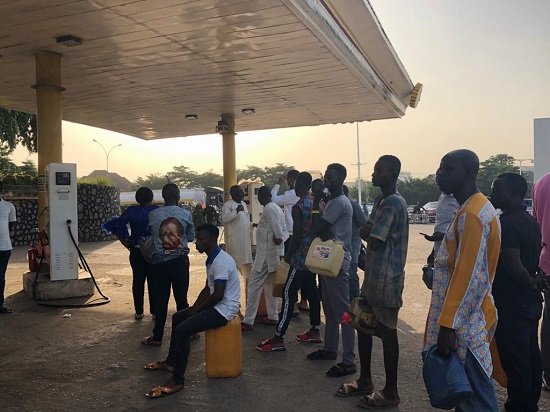 Residents of the federal capital territory, Abuja now live in distress after long queues returned to filling stations across Abuja on Tuesday which indicates fuel scarcity.

Motorists and residents of these Abuja communities were seen stranded at filling stations as queues extended to some lanes on the roads from Garki to Wuse, Apo and Central Area.

Findings revealed that some fuel station had petrol but chose not to sell for undisclosed reasons.

Some of the filling stations were closed for business, despite opening earlier in the day.

Speaking on the development, taxi driver disclosed he had to wait for about seven hours before he could fuel his car.

“I went to Wuse 2 since around 9am and look at the time I left there, this is almost 5pm,” a rather frustrated taxi driver.

“I did not work today but I am happy I filed up my tank.”

The lingering queues come a day after the NNPC allayed fears of fuel scarcity.