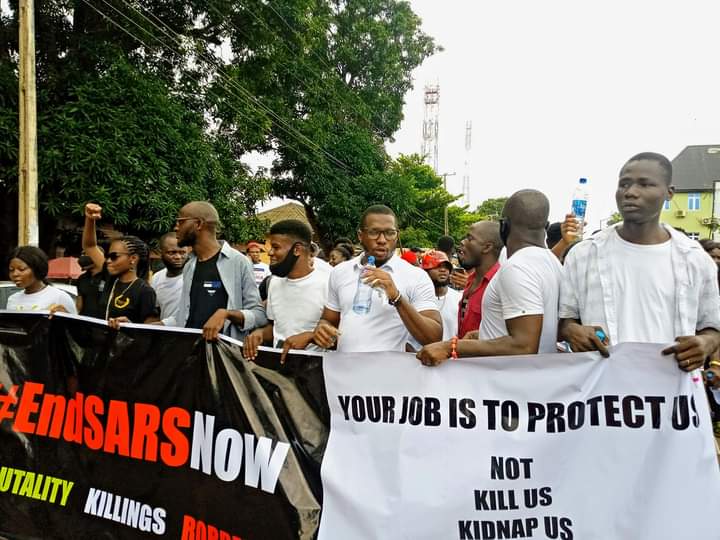 The federal government and the Nigerian Army have been warned of another protest if soldiers who killed protesters are not brought to book.

The federal government and the Nigerian Army have been warned that another protest will take place if soldiers who killed protesters at Lekki toll gate are not arrested and prosecuted.

A coalition of civil society groups made this known on Wednesday after giving the government fifteen-day ultimatum to fish out the soldiers that shot the #EndSARS, protesters at Lekki Toll Gate Lagos.

They flayed the Lagos State government and the Nigerian Army for feigning ignorance of persons behind the shooting when in actual sense they were united in sending troops to Lekki toll gate, which they said the Army finally exposed on Tuesday.

Speaking on behalf of the groups in Onitsha, Publicity Secretary of CD, and Chairman CD, South East Zone, Dede Uzor Uzor, the group also said the Federal Government should set up a fund to compensate the families.

He said, “The protest was peaceful and very well organized, until some suspected thugs sponsored by people with a vested interest in government, started attacking them and instigating the supporters of the protester to violence, before the soldiers of the Nigerian Army, were drafted to open fire on them.

“The story is no more about whether soldiers were involved or not, the Army through Major Olaniyi on Tuesday revealed soldiers involvement and who invited them, we are now concerned about the soldiers or officers that carried out the shooting.

“This kind of shooting of protesting civilians does not happen in a Democratic government, so we are calling on President Muhammadu Buhari and the Chief of Army Staff Lt. Gen. Tukur Buratai, to within fifteen days, fish out Army officials that were responsible for the shooting of the protesters at Lekki Tollgate.

“If at the expiration of fifteen-day, from now to November 1st, 2020, the soldiers of the Nigerian Army who carried out the despicable shooting of the protesters were not shown to Nigerians, we will organize the mother of all protests that Nigerians have never seen in its history, to show to the world that Nigeria is not a banana republic and Nigerians are not happy that their citizens are being killed like rats.”