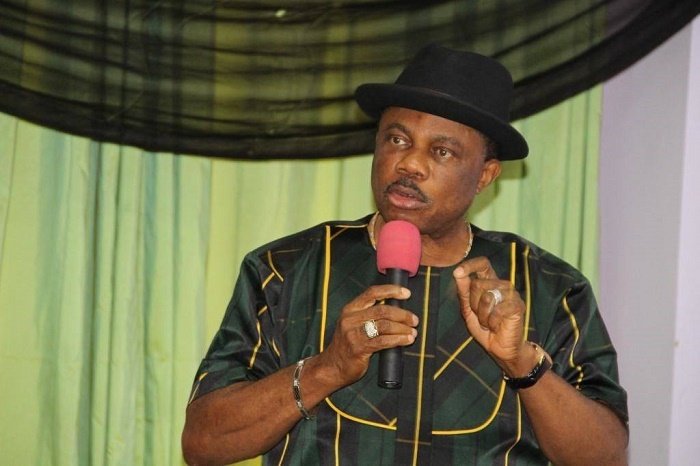 The Executive Governor of Anambra state, Willie Obiano has slammed the Trump administration for opposing the emergence of Nigeria’s candidate for the World Trade Organisation (WTO) director-general, Okonjo Iweala.

This was contained in a statement released by the Anambra state governor, Obiano on Thursday.

Obiano asked President Muhammadu Buhari to mobilise a “diplomatic offensive” to clear the way for Okonjo-Iweala’s emergence as WTO DG.

Nigeria’s nominee for the office of the director-general of the World Trade Organisation, Ngozi Okonjo-Iweala has defeated her South Korea’s trade minister opponent to emerge as the winner of the highly competitive race.

While a consensus among the 164 WTO members is needed to seal her choice, the United States is said to be against her emergence, settling instead for Yoo Myung-hee, the South Korean candidate.

Obiano through the Anambra commissioner for information, C. Don Adinuba asked Buhari to mobilise African and European Union leaders to back Okonjo-Iweala.

“All that is needed is a great diplomatic offensive before the formal announcement of the winner on November 9,” he said.

“The people and government of Anambra State, therefore, call upon President Muhammadu Buhari and other African leaders to immediately set in motion the machinery to get the United States to do the right thing by supporting the most qualified and the most popular candidate.

“The Trump administration wants South Korean Trade Minister, Yoo Myung-hee, who has the support of only 55 nations, about 50 per cent of Okonjo-Iweala’s vote. It needs not to have its way.

He also accused US President Donald Trump of always being against Africans at the international stage.

“Earlier this year it opposed the re-election of Dr Akinwunmi Adesina, Nigeria’s former Minister of Agriculture and African Union’s choice, as the African Development Bank President based on unsubstantiated allegations like nepotism,” he said.

“It is difficult to understand why the Trump administration should be on a collision course with Africans on international assignments … acts like this help fuel criticism that the administration may not be free of racism.

“The people and government of Anambra State are of the opinion that President Buhari needs to do more to urgently mobilise not just African leaders, but also the EU and, indeed, the rest of the world to get the United States to do the right thing.”