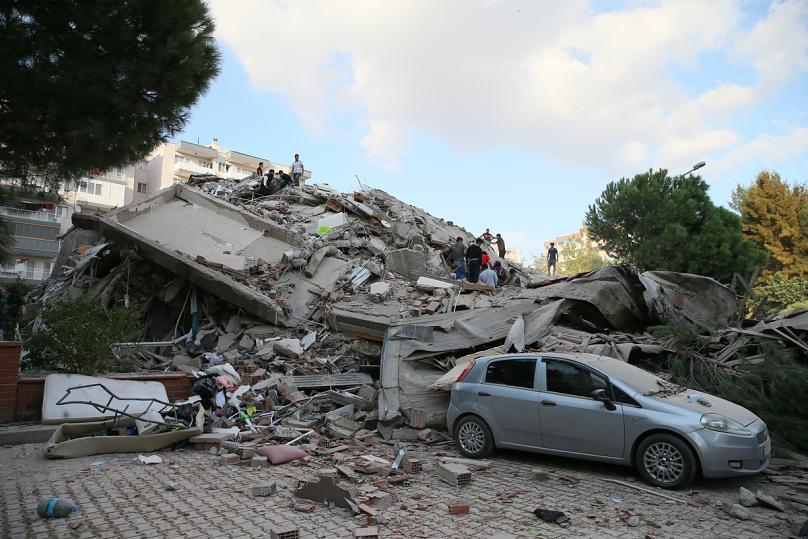 At least 26 people including two children died on Friday in Greece and Turkey after a strong earthquake struck in the Aegean Sea.

Twenty-four of the dead were in the Turkish coastal city of Izmir, and two children died on the Greek island of Samos, emergency services confirmed.

The 6.6-magnitude earthquake hit in the Aegean Sea at a depth of 16.5 kilometres, according to Turkey’s disaster and emergency management authority (AFAD).

The European-Mediterranean Seismological Centre said its epicentre was 13 kilometres northeast of the Greek island of Samos.

The United States Geological Survey put the magnitude of the tremor at 7.0.

AFAD said in a statement issued at 05:00 CET on Saturday that 24 people had died in Turkey, including one drowning, and that hundreds were injured.

Footage released on social media by a local resident shows Izmir flooded by water with debris and furniture washed away.

Turkish media showed wreckage of multiple buildings in Izmir, with people climbing it to reach rescuers. Smoke was filmed in several spots in central Izmir.

“We took action to start the necessary work in the region with all our relevant institutions and ministers,” said Turkish President Recep Tayyip Erdogan in a tweet.

Health Minister Fahrettin Koca said: “We stand by the people of Izmir with all our support.”

“In addition to İzmir, personnel and vehicles from neighbouring provinces were also dispatched to the region for support,” AFAD said in a tweet.

Video posted to social media showed people searching the rubble for people who may be trapped.

Speaking to Euronews Tonight, the deputy director-general of the Turkish Red Crescent, Ibrahim Ozer, said that the organisation has “more than 3,000 volunteers” in Izmir, who are currently providing people with “hot soups and beverages” and will keep providing assistance at least for the next 24 hours.

He added that Turkey is currently on emergency level “three”, which stands for “nationwide disaster”.

Turkish media said the earthquake was felt across the regions of Aegean and Marmara, where Istanbul is located. Istanbul’s governor said there were no reports of damage.

The quake was felt across the eastern Greek islands and even in the Greek capital, Athens. Greek media said the residents of Samos and other islands fled their homes, while some rockfalls were reported.

Greek public television reported that a “mini-tsunami” occurred on the island of Samos.

Greece’s Special Department for Medical Disaster (ETIK) confirmed that two children had died on the island, in the town of Vathi.

“The two children, shortly after the earthquake were leaving their school. As they were passing a narrow street of the city, a wall from an old building collapsed and crushed them,” emergency services wrote on Facebook.

“Despite the best effort of (emergency services) EKAB rescuers to release them alive, the children did not make it,” it added.

Prime Minister Kyriakos Mitsotakis offered his “most sincere condolences” to the families of the two victims.

“Words are too poor to describe how one feels about the loss of children. In these difficult times, our thoughts are with their families and the unbearable pain they experience,” he wrote on Twitter.

Earlier in the afternoon, he had held a call with Erdogan “to offer my condolences for the tragic loss of life” caused by the earthquake.

“Whatever our differences, these are times when our people need to stand together,” he added.

I just called President @RTErdogan to offer my condolences for the tragic loss of life from the earthquake that struck both our countries. Whatever our differences, these are times when our people need to stand together.

“France stands alongside the Turkish and Greek peoples to face this terrible ordeal,” the French interior minister said on Twitter.

“If the governments of these countries so wish, French aid can be immediately dispatched,” he added.

EU chiefs Ursula von der Leyen and Charles Michel have both said their “thoughts” are with the people of Greece and Turkey and said that the bloc stands ready to provide assistance.

My thoughts are with Greece and Turkey.

We are following the situation and we stand ready to help, in all possible ways. https://t.co/aQlxLGxUf8

Relations between Turkey, Greece and the EU have soured in recent months due to a dispute over water rights in the Eastern Mediterranean.