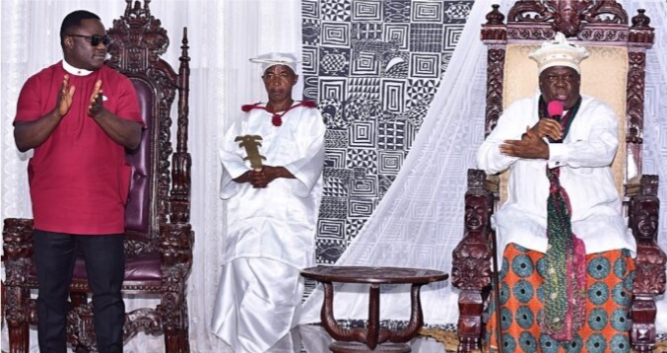 Reports have it that the Obong of Calabar, Edidem Ekpo Otu has requested that the Governor of Cross River state to step aside and learn governance.

According to Daily Trust report, the monarch blamed Ayade for the vandalism, looting and destruction of public and private property in the state last week.

The traditional ruler also stated that the governor of Cross River state, Ayade needs to step aside to enable an interim administration come up so that he can learn governance.

The monarch made this statement while hosting a former governor of the state, Liyel Imoke who paid homage to him in his palace.

“The Governor should be able to open his door for people to come in, and should work with everybody. We have to face it; we don’t need to play around with it; we cannot continue this way. You tell him that there is a need for total reconciliation; a total rehabilitation of whatever he has been doing.

“Everybody matters in this state. He should be able to talk to people. He wouldn’t call you and even when you call him, he doesn’t answer the call. Nobody talks to him.”

Speaking firstly, the former governor of the state, Imoke told the royal monarch, Obong that he thought it wise to seek the help and cooperation of the traditional institution in finding a way out of the problem.

He said he was directly affected by the crisis which trailed the #EndSARS protests between October 23 and October 24.

The former governor’s wife, Obioma, lost items in her shop, which was vandalised by suspected hoodlums.

“We came to get some advice from you before we even set out to look for solutions, to ensure that never happens again in Cross River State,” he told the monarch.

“We need your guidance as we go about looking for solutions to the challenge of young people who are unemployed and have grievances; young people who think they don’t have the opportunities others have had.

“We do not understand the extent of the carnage. We are all victims of this incident. If you were not hit directly, you were hit indirectly. For me, I was hit directly. So were very many public officials. They were also hit directly.”