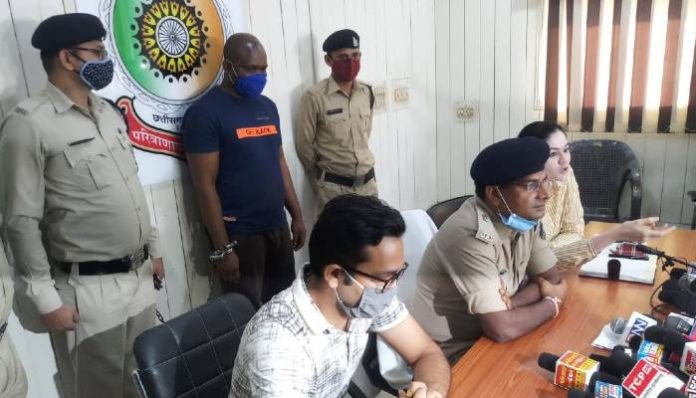 A Nigerian man has been arrested on Friday, October 30 from Mumbai and brought him to Chhattisgarh on charges of supplying cocaine and psychoactive drug MDMA to peddlers by police in Raipur.

According to Raipur Senior Superintendent of Police Ajay Kumar Yadav, the 38-year-old accused identified as Patrick Ubeke Bako was arrested for allegedly involving in supplying cocaine and MDMA to Raipur, Bilaspur and Durg districts in Chhattisgarh.

Additional Superintendent of Police (City) Lakhan Patle said the arrest of the Nigerian national was based on the inputs from already arrested drug peddlers.

“The arrest of Nigerian is in connection with Raipur Police ongoing campaign against drugs. It’s being considered as one of the biggest breakthroughs so far,” said Patle.

According to ASP Patle, after learning about the whereabouts of Patrick, a police team was dispatched to Mumbai following which he was nabbed.

“During the interrogation, Patrick revealed of procuring contrabands from his Nigerian friend Chisom Patrick and operating the drug net in separate states in country. The Nigerian drug peddler was being interrogated by police to collect inputs about his links. He is an important part of contrabands’ supply chain and source from where Shreyansh Jhabak and Vikas Banchor, who were earlier arrested by police in drug case, were procuring the contraband,” informed ASP Patle.

Patle further added that Shreyansh Jhabak and Vikas Banchor were introduced to the Nigerian by Raidon Bethelo, a Mumbai-based transporter who was arrested in Raipur recently.

Police further revealed that it have so far arrested 15 drug dealers including a womani nvolved in illegal drug peddling in October and September.

Two mobile handsets were seized from the accused. He is being questioned to know about the involvement of others in the drug trade.

In connection with the case, Kotwali police have registered an offence against the accused under relevant Section of Narcotic Drugs and Psychotropic Substances (NDPS) ACT.