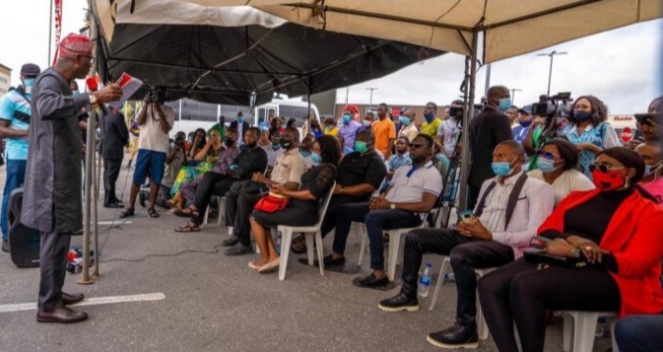 The Lagos state government has vowed to provide financial support for business owners whose stores were looted and vandalised during the #EndSARS crisis.

Recall that Lagos recorded high level of violence, looting and razing of government and private properties as a result of the shooting of #EndSARS protesters at the Lekki tollgate in Lagos on October 20, 2020.

Lagos state governor, Sanwo-Olu made the vow while speaking on Sunday during a meeting with tenants and shop owners at Circle Mall in Lekki.

Babajide Sanwo-Olu said the owners of vandalised stores would be given tax breaks, as well as other forms of financial support.

In a statement released by Gboyega Akosile, the chief press secretary to the governor, Sanwo-Olu also implored the federal government to consider providing tax relief for the affected business owners.

“The Governor said Lagos State Government will give all business owners in the burnt Circle Mall tax break of PAYE and also appealed to Federal Government to ensure that they get tax relief from the Federal Internal Revenue Services (FIRS),” the statement read.

“Governor Sanwo-Olu said the State Government will give victims of the Circle Mall financial support, which will be in form of grant or loans to cushion the effect of the looting and destruction of their respective shops and stores.

“Sanwo-Olu said the grant support is a non-refundable financial support to the victims. He said the affected businesses are not expected to pay back while the lending support would be in form of a loan, adding that he is already discussing with some financial institutions to assist people with zero interest loans.

“Sanwo-Olu also asked the shop owners to reach out to the Lagos State Employment Trust Fund (LSETF) and urged them to make use of the opportunities being provided by the agency in assisting people who are in business, especially small-scale businesses.”

The governor also urged Lagos residents to ensure that they are “agents of positive change” in their respective communities, adding that “Lagos state will no longer tolerate hoodlums looting and destroying government and private businesses and properties.”