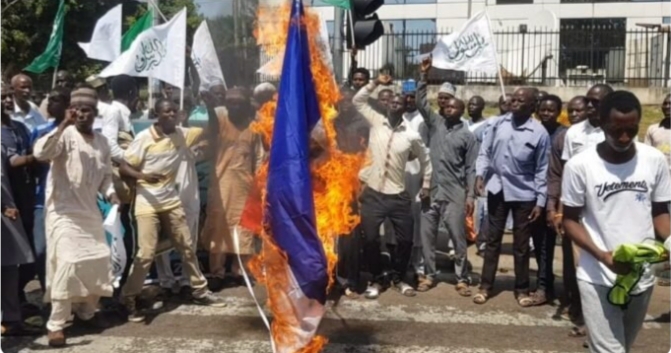 The flag of France was on Tuesday burnt in the federal capital territory by aggrieved members of the Islamic Movement of Nigeria (IMN) over President Emmanuel Macron’s comments on cartoons of Prophet Mohammed published in a magazine.

The cartoons have been described by many Muslims as “blasphemous.”

Macron in an interview with Al Jazeera on Saturday said he understands the sentiments expressed by Muslims over the cartoons but he has a duty to protect rights – such as freedom of expression – of citizens in his country.

“You must understand my role right now, it’s to do two things; to promote calm and also to protect these rights,” Macron said.

“I will always defend in my country the freedom to speak, to write, to think, to draw. I think that the reactions came as a result of lies and distortions of my words because people understood that I supported these cartoons.”

The Islamic Movement of Nigeria members during their march in the FCT burnt the flag of France while chanting songs.

“We set France flag on fire in a reaction to the attack on Islam and Muslims by the President of France Emmanuel Macron since the heinous crime of publishing cartoons of the Prophet by the magazine Charlie Hebdo,” Munir said in the statement distributed during the protest.

“Hence we applaud the current campaign across Muslim and all lovers of peace and humanity.”

The demonstration led to a panic at Wuse market where it ended.

Some traders hurriedly locked up their shops in panic over the possibility of an outbreak of violence.