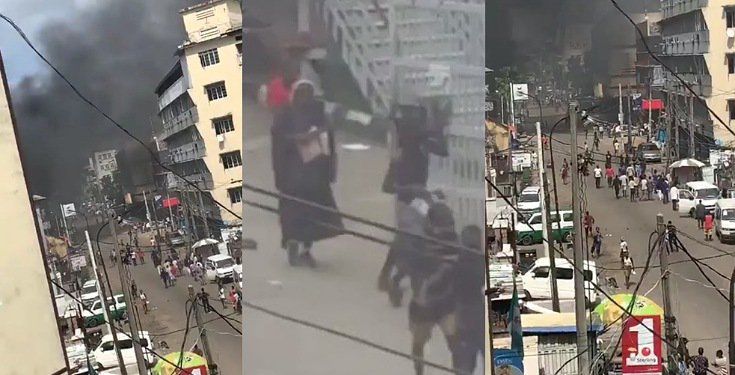 The Coalition of Concerned Citizens (CCC) has called for a probe over a possible sponsored attack on a Lagos court and properties belonging to All Progressives Congress chieftain, Bola Tinubu during the EndSARS protest.

According to the group, it is likely that the ex-Lagos State governor may be behind the vandalism of the Igbosere High Court as well as his own investments.

Recall that Tinubu, Alpha Beta, and the current Managing Director of the firm, Akin Doherty had been dragged to court for money laundering by his business partner and former Managing Director, Dapo Apara.

It is alleged that Alpha Beta is being used for massive corruption purposes including tax evasion, bribery of government officials, diversion of funds and money laundering.

However, the case file marked LD/7330GCMW/2020 was burnt by hoodlums with Apara’s lawyer noting that a new court case will have to be filed at Ikeja High Court.

And according to the Coalition of Concerned Citizens, the attack appears to be a deliberate attempt to wipe away evidence and cover-up the APC chieftain’s top secrets.

The destruction of some of his business interests, the group reckoned could also be a calculated attempt to keep the ‘Jagaban’ political relevant in the buildup to the 2023 general elections.

The Coalition of Concerned Citizens, however, urged the Federal Government to as a matter of urgency unravel the circumstances behind the EndSARS protest and the arson committed in Lagos State.

It also expressed confidence that indeed a nexus exists between the protest and the arson committed in Lagos State.

We welcome you all to this press conference convoked to demand a thorough probe of the arson that was committed in parts of Lagos State during the EndSARS protest. We wish to state that the circumstances that led to the escalation of violence in Lagos State are indeed suspect given the action of the hoodlums that touched some select properties, especially that of some private concerns including the business interest of the former governor of Lagos State, Ashiwaju Bola Tinubu.

The leadership of the Coalition of Concerned Citizens feels compelled to inform the generality of Nigerians that indeed from the look of things, there appears to be something fishy when the inventory of the properties destroyed are taken into account.

It is our considered opinion that what happened in Lagos State leaves more to be imagined because it is too much of a coincidence for some select properties to be destroyed by suspected thugs.

The selectiveness of the hoodlums is indeed suspect and an indication that some individuals and groups might be trying to insult the intelligence of Nigerians through their despicable actions.

We are consequently constrained to ask critical questions as concerned citizens of Nigeria hence this call for the relevant authorities to carry out a detailed probe of how the hoodlums would selectively touch properties especially those linked to a particular individual, including a court of competent jurisdiction slated to hear a case of fraud against Alpha Beta, a company of the former governor of Lags State, Asiwaju Bola Tinubu.

This is on the heels that the Mr Tade Ipadeola, the lawyer representing the former managing director of Alpha Beta, Dapo Apara alleged that the court papers filed against Bola Tinubu’s Alpha Beta were burnt in the process.

The lawyer stated that “Everything in Igbosere High Court got burnt including the registrar’s copy of our application.”

This is indeed a strange occurrence when it is realized that the Igbosere High Court was the only Court that was burnt by the suspected hoodlums.

We are also constrained to add that aside the burning of the Igbosere High Court, some select properties of Bola Tinubu was also burnt by the hoodlums. Could this be deliberate?

The Coalition of Concerned Citizens wishes to state that indeed Nigerians have a right to know what truly transpired and if indeed it was sponsored to destroy evidence and cover up some top secrets that might be detrimental to Bola Tinubu’s political relevance in the buildup to the 2023 general elections where it is speculated that he is nursing an ambition.

If indeed this is the case, it is unacceptable and must be thoroughly investigated as no individual or group should take Nigerians for a ride in this critical point of our existence as a country.

The Coalition of Concerned Citizens is using this medium to call on the federal government to as a matter of urgency unravel the circumstances behind the EndSARS protest and the arson committed in Lagos State.

We have no doubt whatsoever that indeed there is a nexus between the protest and the arson committed in Lagos State and why it is expedient for Nigerians to know the truth and bring to justice whoever is trying to cover his tracks.

We believe that indeed Nigerians are not gullible in this regard hence the need for a thorough investigation into the activities of the hoodlums that committed arson, which has every colouration of deliberate sponsorship by some highly placed individuals that claim to be democrats and working the interest of Nigeria.

The Coalition of Concerned Citizens believes that there is indeed a nexus between the protest and the arson that was committed in Lagos State and the relevant agencies in Nigeria must act in the overall interest of the country.

We also wish to state that there should be no sacred cows and the government must not be seen to be protecting the interest of a select few at the detriment of the destinies of over 180 million Nigerians.

The exigency of time requires that urgent and proactive steps are taken in our pursuit of the country of our dreams. The Coalition of Concerned Citizens is confident that at the end of the day, the truth shall prevail.

We also wish to state that our commitment to building the Nigeria of our dreams remains unwavering; hence this press conference which remains in the best interest of our dear country.

The Coalition of Concerned Citizens appreciates the government and other relevant stakeholders for their efforts in the restoration of law and order in the country.

While thanking you all present for your time and attention, please be assured that in the fullness of time Nigerians shall know the truth and those trying to insult the sensibilities of Nigerians shall be brought to face the full wrath of the law.

Thank you all, and God bless.