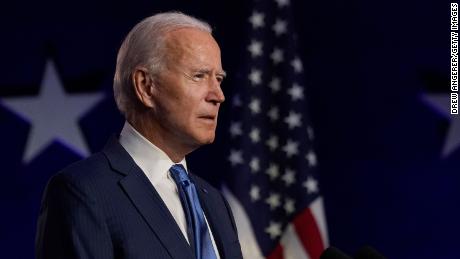 The nail-biting vote count that saw Joe Biden secure a decisive win in the Nov. 3 election was not the last step in selecting America’s new president. Under a complex system that has been tweaked over two centuries, there is still a weeks-long timeline during which the 538-member Electoral College picks the president.

The president-elect has signaled that he plans to move quickly to build out his government, focusing first on the raging pandemic that will likely dominate the early days of his administration.

Biden has named a former surgeon general, Dr. Vivek Murthy, and a former Food and Drug Administration commissioner, David Kessler, as co-chairs of a coronavirus working group set to get started, with other members expected to be announced Monday.

It’s unclear for now whether President Donald Trump and his administration will cooperate. He has yet to acknowledge Biden’s victory and has pledged to mount legal challenges in several closely contested states that decided the race.

The always-frenzied 10-week transition period before Inauguration Day on Jan. 20 already has been shortened by the extra time it took to determine the winner of Tuesday’s election. Here’s a look at the key steps ahead:

After Election Day, states count and certify the results of the popular vote. When completed, each governor is required by law to prepare documents known as “Certificates of Ascertainment” of the vote. The certificates list the electors’ names and the number of votes cast for the winner and loser.

Dec. 8 is the deadline for resolving election disputes at the state level. All state recounts and court contests over presidential election results are to be completed by this date. Trump has vowed to contest results in all states where Biden secured a narrow win.

Dec. 14: Electors vote by paper ballot in their respective states and the District of Columbia, before signing six “Certificates of the Vote”. Most states have laws or party regulations requiring electors to vote the same way the popular vote goes, and in some states, electors can even be replaced or subjected to penalties if they fail to do so.

Dec. 23: The certificates must be delivered to the designated officials, including the president of the Senate. If they are not delivered, the law provides alternative avenues for getting the results to Washington.
Electoral vote count

Jan. 6, 2021: The House and Senate hold a joint session to count the electoral votes. If one ticket has received 270 or more electoral votes, the president of the Senate, currently Vice President Mike Pence, announces the results.

Jan. 20: The president-elect is sworn into office on Inauguration Day.