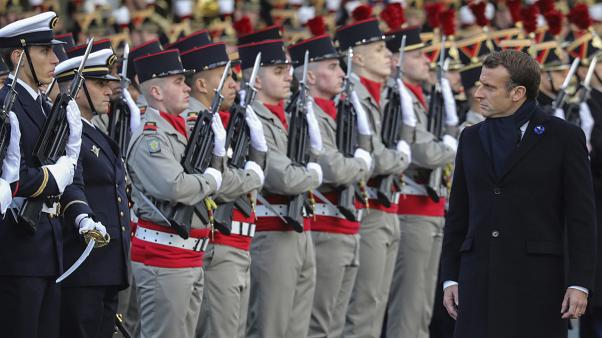 The French president laid a wreath at the Tomb of the Unknown Soldier to mark the armistice that ended the Great War on the “11th hour of the 11th day of the 11th month” of 1918.

He then rekindled the flame at the foot of the tomb during a solemn ceremony that was scaled back due to the Covid-19 pandemic and lockdown measures.

French officials will later move the remains of wartime writer Maurice Genevoix into the country’s Panthéon of national heroes, an honour championed by Macron to encourage remembrance of the conflict.

Genevoix wrote five memoirs of his time as a frontline soldier experiencing the horrors of trench warfare in the conflict, which he later collected into a single book “Ceux de 14” (“Men of 14”).

The work is considered by many to be the single greatest literary work to have emerged in French from the 1914-18 war, with its raw insight into the experience of battle drawing comparisons with “Storm of Steel” by German writer Ernst Junger or the English poetry of Wilfred Owen.

Marking 102 years since the end of World War I, an installation by French composer Pascal Dusapin and German artist Anselm Kiefer, commissioned by the French presidency, will also be put in the Panthéon.

Officials in the Limousin region will commemorate the deeds of a six-year-old boy who is hailed as the youngest French World War II hero for carrying messages under his shirt to leaders of the resistance against Nazi occupation.

The name of Marcel Pinte — known as Quinquin — will be inscribed on Wednesday into the war memorial in Aixe-sur-Vienne just west of the city of Limoges.