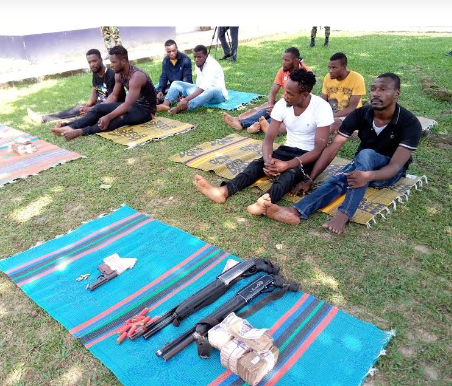 Eight suspected kidnappers, sea pirates and armed robbers including a university graduate have been arrested by the Nigerian Army in Cross River state.

This was disclosed on Monday, November 9 by the Commander, Sector 4 Land Component Operation Delta ,Safe (OPDS) Col. Omubo Idoniboye-Obu while handling over the suspects to the state police command.

Idoniboye-Obu said the suspects were arrested during series of operations conducted by the sector between October 10 and 16, 2020.

Investigations revealed that the suspects were involved in kidnapping and armed robbery.

“Following the upsurge of kidnapping, sea piracy and robbery incidents in Calabar and environs, sector 4, OPDS collaborated with other security agencies with a view to checkmate the activities of criminals,” he stated.

Some of the suspects include Ita Oku Ndiyo (a.ka Commander Musty), a 27-year- old graduate of Cross River University of Technology, CRUTECH and leader of a notorious four-man criminal gang comprising of Bassey Effiom Okon, 27 ( a.k.a Eteka Bulldog ) an ex-convict who was declared wanted by the state government, Atuo Kenneth Martins, 32, an indigene of Nsufang Etung LGA of the state and Idang Anwakang, 33 (a.k.a Tallest).

“They robbed one Mr. Jan and Mr. Bobby (Cameroonians) on October 9, and 20, in Ikom LGA of the state and dispossessed them the sum of N4million naira and 181,000 CFA France,” he said.

Others arrested for robbery include Ajom Daniel ( a.k.a Bad Drug) , Godwin Ikono Nyong,34, (a.k.a German Machine) and 19-year-old Moses Edem (a.k.a Palo ).

Col. Idoniboye –Obu stated that some of the suspects are ex-convicts while others have been on the wanted list of the state security agencies in the state.

He said, as required by the Harmonised Standard Operating Procedure, the Sector officially hands over the suspects to the Commissioner of Police Cross River State Command while the truck and exhibits go to the Economic and Financial Crimes Commission.

The colonel called on all law-abiding Cross Riverians to cooperate with the sector by giving timely and credible information as it is committed to eliminating crimes in the state.